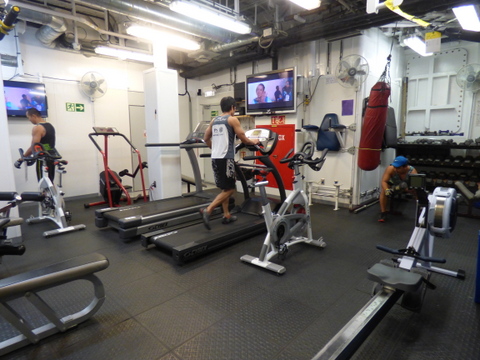 I don’t think I’ve mentioned off-work time yet.  So even though there’s not a huge amount of it (depends on how much you sleep, I guess – I sleep ~6 hrs/night so I still have 6 hrs of wakeful down time), all recreation is limited to just a few areas on the ship.  I’ve already said that I like to drink my morning coffee out on the helipad deck and watch the waves*.  Then I go to the picnic tables near the bow of the boat and watch some more waves.  It’s kind of like campfires – for some reason it just never gets boring, more like mesmerizing.  There’s also a pretty well equipped gym in one of the lower decks, as you can see.  Tomorrow I’ll write about some of the more group-oriented recreational options.

*The helipad is also the site of the half marathon being run at the end of March by co-chief scientist Ian Hall and his colleague Steve Barker, both from Cardiff University.  They are running on behalf of a S. African charity called Goedgedacht Trust, as part of the IAFF/Cardiff University World Half Marathon Championships.  328 loops around the pitching and rolling deck – yipes!