Noon Shadows on the JR
Retrieving the CORK 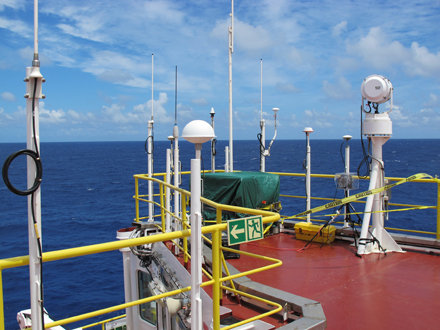 So, the equinox activity didn’t turn out quite as I would have expected, but it was fun to be outside on the top deck in the sun and the wind, so I’d say it was a success!

First, I searched the ship for some meter sticks to use, but to no avail. I ended up with a 1.5 m stick (the one we use to measure core sections) and a core pusher (not very flat on top, but it was all I had). Then, because the schedule of operations is constantly changing, it just so happened that most of the scientists were eagerly awaiting the arrival of the first samples during our local noon, so I was on my own for this activity. No problem, except I couldn’t find any place on the deck to lash my core pusher to so I wouldn’t have to hold it upright. Because we are fairly close to the equator, the shadows were pretty short, so finding some space where I could actually measure them was pretty tricky, too.

Once I found a good spot, I attempted to make my first measurement and found that the roll of the ship caused the shadow to swing back and forth by about a centimeter or more. Because this made it hard to see the measurement on the meter stick, I decided to mark the deck with a pencil and then measure later. As time passed I could see that my shadow was moving in a slow arc across the deck…and realized that the position of the sun was changing in the sky. Now I had that movement to account for, too! At what I thought was local noon (11:57, according to the US Naval Observatory), I took several measurements and took the average to account for ship sway.

So here are my calculations:

That means that our latitude should be about 22.725° N. I compared this with our actual Latitude at noon, which was 22.756° N, according to the GPS (thanks, Captain Steve!).

I’d say that with all of the possible sources of error, this result is pretty good! No wonder Eratosthenes was able to calculate the circumference of the Earth using shadow measurements!