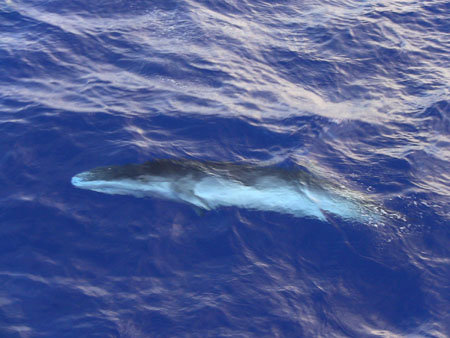 I know that the focus of Expedition 329 is microbial life in the ocean sediments but apparently the larger organisms are jealous and continue to remind us that they are here also. We had a whale visit us last evening and it provided a lot of excitment as it put on a show for us. The whale swam across just ahead of the bow, down the port side, and then back again to cross the bow a second time! At the other end of the spectrum, deep underwater are the microbes. This is what excites David Smith. David Smith is a microbiologist on Expedition 329. As we cruise the South Pacific Gyre, he is interested in where microbes within the seafloor sediments get their energy since they live in total darkness. There is very little food falling from the surface so perhaps they are making their own food. Within the sediments are small amounts of radioactive elements. The radiation that they emit includes alpha particles, beta particles, and gamma rays. This radiation separates water molecules (seawater) into hydrogen and oxygen gas near the seafloor. As the hydrogen moves through the sediments, microbes may use it for energy to produce their own food, much like plants use sunlight. To test this idea, David adds distilled water to a sample of the seafloor sediments in a container containing no air bubbles. He injects a small bubble of purified air (scrubbed of hydrogen) into the container and lets it sit for a period of time. Using a syringe, he samples the air bubble and if it contains hydrogen, it indicates no microbe activity. If the bubble contains no hydrogen, then it at least indicates that there are microbes within the sediments making use of the hydrogen that is created by the radioactivity activity.