One of Kraken’s tentacles?

Inquiring Minds Want to Know: A Student Asks How We Drill
We've Made it Past the 920-Meter Mark! 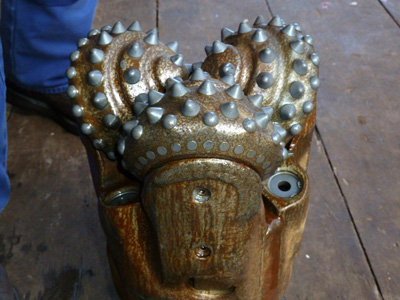 Earlier this morning, a friend of mine wrote on facebook that this object resembles a Kraken’s tentacle. Another one thought it looks like a Jules Verne creation. Make up your own mind … 🙂

This is one of the tri-cone drilling bits that we use for drilling only (coring bits have a slightly different design, with four roller cones, four jet nozzles, and a throat in the middle to let the newly cut core moving through the bit). As we are now making progress downwards, as reported by Sarah in her blog, we are still using a tri-cone bit to drill through obstructions, ream and clean the borehole, before we can eventually go back with a coring bit and hopefully get new, deeper cores from Hole 1256D.

The first rotary drilling bit (2 cones) was patented by Howard Hughes’ father in 1909. This revolutionized the drilling of oil wells at the beginning of the 20th century, and made Howard Hughes Sr. a billionaire… Everyone knows the story after that.