One of Our Co-Chief Scientists 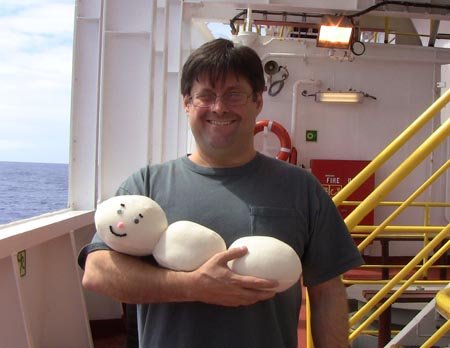 Hi everyone! The scientists have many sediment cores to analyze from our third location so all of the labs will be quite busy for the next several days. Since things go on around the clock, one of the responsibilities of our co-chief scientists is to make sure things are running smoothly and on schedule. Today, I am going to tell you about one of the co-chief scientists, Steven D’Hondt.

Steven D’Hondt grew up in Washington State and started collecting rocks when he was seven years old. When he turned eight, his parents bought him a mineralogy kit. They encouraged his interests by taking him rock collecting for things like amethyst and petrified wood and even to mineral shows. When he went on to college, though, he decided to major in economics and not science. One of his first classes was about geology and after one of his professors encouraged him to take another geology class, he was hooked. A lesson to be learned is, don’t be afraid to try new things, you might find that you like them. Steve went on to earn a PhD in geology at Princeton University.

As he worked in the field of paleontology (ancient life) and geochemistry (the chemistry of the earth), he became interested in present day life forms on our planet. This led him to the field of oceanography, where there is a lot of life.

In his spare time, Steve likes to spend time with his family, and he likes to cook and garden.

(In the photo below, Steve is inspecting some cores with the other co-chief scientist, Fumio Inagaki, whom we will learn about another day.)