Our Other Co-Chief – Fumio Inagaki

Our Other Co-chief Scientist – Fumio Inagaki
Ship Board Trash 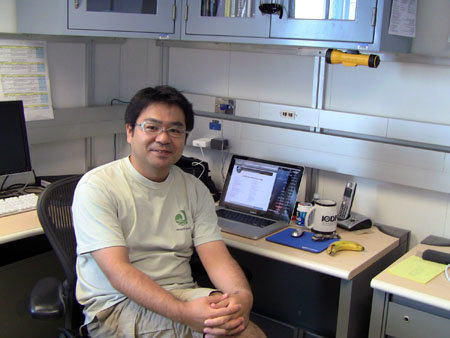 Good day everyone! Today, I would like to tell you about our other co-chief scientist.

Fumio Inagaki is one of the co-chiefs for this expedition. He is a microbiologist and earned his PhD in molecular genetics and environmental microbiology from Kyushu University in Japan.

Fumio’s interests changed after an interesting problem was brought to his attention by a friend, who was a geologist. It seems that at some geothermal electric power plants, pipes were being clogged by a material that Fumio thought might the result of microbe activity. In addition, microbes were being flushed downstream to cold water where they could not survive because of the big change in their living environment. This led him to become interested in microbes that live in the sediments on the seafloor.

Over the years, he has been involved with microbe research in Japan and Germany. This is not Fumio’s first time on the JOIDES Resolution; he also sailed on ODP Leg 201 and IOSP Expedition 301. His current research focuses on how can microbes survive in the extreme conditions at the bottom of the ocean. For instance, how do they get their energy?

He likes to sail on the JOIDES Resolution very much but he also spends time with his wife and children in Japan. He has a three and a half year old son and very young identical twin daughters.