Our Science Mission on Expedition 335

If the Seafloor is Spreading, Then Why Doesn’t it Take Over the World?
A tale of patience and perseverance 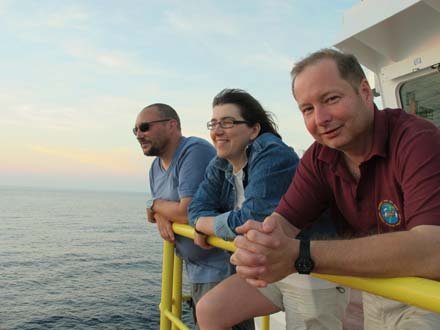 What is our scientific mission?

The main purpose of Expedition 335 "Superfast Spreading Rate Crust 4" is to drill and core beneath the seafloor, delving further into intact oceanic crust than ever before, and recovering "gabbro" for the first time from the lower crust. This would mark the deepest type of rock ever extracted from intact fast-spreading ocean crust. About 3 square kilometers of new crust is formed at the mid-ocean ridges every year and this process has repaved about 60% of our planet in the past 200 million years – a geological blink of an eye in Earth’s 4.6 billion year history.

To accomplish our mission, we have returned to ODP (Ocean Drilling Program) Hole 1256D (6°44.2’N, 91°56.1’W) in the Pacific Ocean, about 900 kilometers west of Costa Rica. Ours is the fourth scientific research expedition to drill in Hole 1256D, which lies in ocean crust that formed approximately 15 million years ago at a "superfast" rate (at more than 20 centimeters a year, which is faster than any present-day crust formation). The fact that the crust formed so fast in this location makes the upper crust here thinner than elsewhere, making it possible to reach the lower portions of the ocean crust without having to drill as deep as would be necessary in other parts of the world.
Hole 1256D currently penetrates about 1500 meters below the seafloor, and reaches the base of the upper, volcanic crust. Expedition 335 continues the mission to understand the formation of oceanic crust by attempting to further deepen Hole 1256D and study the magmatic rocks of the lower crust, which we expect to access for the first time intact in their original position.
By recovering and studying samples of the lower crust, we will be able to test working hypotheses about how new ocean crust is constructed, and how the crust reacts with seawater as it forms and as the crust cools and spreads away from ocean ridges.

Why study the formation of oceanic crust?
Although oceanic (vs. continental) crust represents almost 2/3 of the Earth’s surface, we know surprisingly little about it. In particular, we want to better understand the formation of new crust, which occurs along Earth’s mid-ocean ridges.
The formation of new crust at the ocean ridges represents the first step in Earth’s plate tectonic cycle, where new plates are formed. This provides the principal mechanism by which heat and material are lifted from within the Earth to the surface of the planet. Earth’s surface is made up of 14 tectonic plates – and it is the motion and interactions of these plates that leads to mountains, earthquakes, volcanoes, and the recycling of elements (carbon for example) between the Earth’s interior, oceans, and atmosphere.
What are “gabbros” and why do they matter?
Gabbro is a coarse-grained, granite-like material sometimes known as ‘black granite’ that is often used in kitchen countertops and on the front of commercial buildings such as banks (which are now frequently turned into wine bars in the UK!). Gabbro forms when molten rock under the Earth’s surface, or magma, is trapped and slowly cools. The magma that produces gabbros is generated when the solid mantle partially melts about 60 kilometers below the mid-ocean ridges, as the mantle rises within the Earth. (As you can see in the diagram below, the mantle lies just beneath the crust).

[Illustration by Sarah McNaboe, Integrated Ocean Drilling Program/US Implementing Organization]
Developing a comprehensive understanding of how ocean crust forms at mid-ocean ridges requires samples of gabbro, because it is these coarse rocks that hold records of the deep magmatic, hydrothermal, and tectonic processes that dominate in Earth’s lower ocean crust.
Why is it so difficult to get to gabbro in fast-spreading ocean crust?
Gabbros make up more than 65% of the oceanic crust, but in fast-spreading crust, these rocks generally lie beneath 1000 to 2000 meters of hard upper crustal rocks, which has made it challenging to reach them through scientific ocean drilling.
In fact, past drilling of the upper oceanic crust has been fraught with problems of low core recovery, poor hole conditions, and equipment failure, all because of the hard and highly fractured nature of volcanic rocks that are prevalent in the upper oceanic crust, and which must be drilled through in order to reach the magmatic gabbros. The “Superfast” campaign (consisting of multiple scientific ocean drilling expeditions returning to this single hole) developed from the idea of minimizing the thickness of upper crustal rocks that would have to be cored before sampling gabbros in fast-spreading ocean crust.

[Co-chief Benoit Ildefonse addresses the Expedition 335 science party aboard the JOIDES Resolution]
Why is it so important to sample gabbros in the place where the rocks originally formed ("in situ")?
Drilling a complete in situ section of ocean crust has been an unfulfilled ambition of Earth scientists since the inception of ocean drilling in the early 1960s.
Why is this so important?
It isn’t that we expect big surprises in terms of the types of rocks we will recover from the lower portion of the ocean crust – we already know what’s down there. The problem is that the samples scientists currently have available for study have all been deformed and chemically altered by the processes that brought them nearer to Earth’s surface (through tectonic mountain building and faulting in slow-spreading crust).
Consequently, the thermal, chemical, and perhaps biological exchanges occurring deep in the oceanic crust remain poorly understood because of this lack of direct observations in situ. What we are looking for is to study the structure and composition of these rocks, from the microscopic scale to a scale of several hundred meters, in situ (which means undisturbed, in their original position).
Until we have samples taken at depth, there are many scientific questions that simply cannot be answered without a large level of speculation.