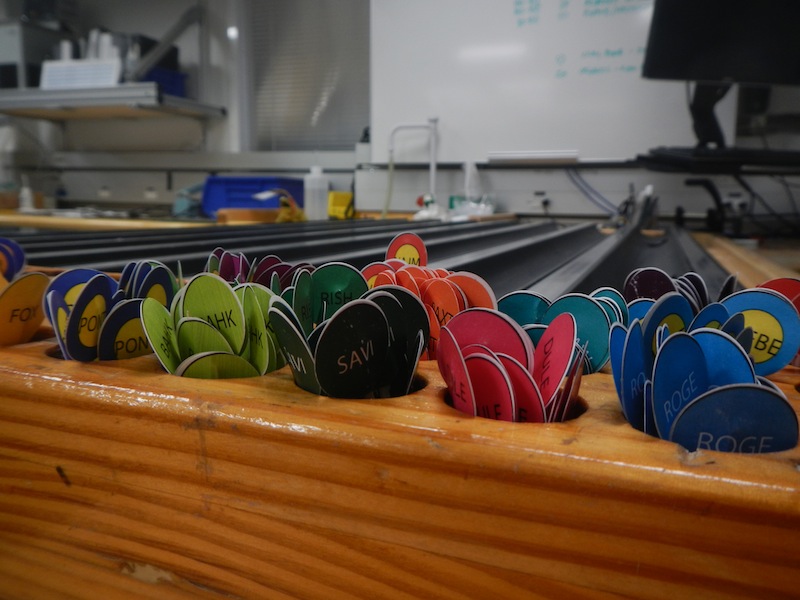 Today at 6 AM we reached the first site that we are going to core in the Bay of Bengal. Even though we don’t have any mud yet, we are busy preparing for the big day.

Every minute counts when you are at sea, especially when you are participating in a cruise with as many moving parts – mechanically and intellectually – as an IODP Expedition. To use our time effectively, we need most of all to plan ahead.

How do you plan ahead when you are about to be the first people to see mud that has been buried for millions of years? The planning for this expedition started over a decade ago, when the chief scientists, Christian France-Lanord and Volkhard Speiss (along with fellow Bengal Fan fans), wrote a proposal to collect deep cores from the Bengal Fan. To convince IODP that this expedition was worth doing, Christian and Volkhard needed to have an idea about what they expected to find. How deep would the ship need to drill, and how old would the mud be at the bottom of the holes? What kinds of laboratory analyses would help us make sense of the Bengal Fan’s geology? These aren’t just academic questions: Nobody wants to participate in (or fund) an expedition that is going to produce disappointing results. But even fewer people want to participate in an expedition that breaks a multimillion-dollar drilling system, or that needs to stop because of bad weather.

So Christian, Volkhard, and their team of collaborators used the tools and the information they had to say what they could about the fan. Volkhard, for example, used seismic waves and sonar to find out how dense and how layered the sediments were all across the Bengal Fan. Christian looked at the chemical compositions of rocks to tell how quickly the Himalaya were being worn down. The original team of scientists put together information from these and other sources to build a picture of the fan’s composition and history, which allowed the team to forecast what we might see once coring starts tonight.

Just as the chief scientists had to propose a plan for this expedition, so, too, do we scientists on board propose our own sampling plans. The cores we bring up from the seafloor are valuable, and we want to maximize the number of scientists who can use them. On board the ship, we write (and often rewrite) our own sampling proposals to convince the sample allocation committee, our fellow scientists, and ourselves that we can get something useful out of the cores we collect. Otherwise, we need to go back to our rooms, to look over the seismic surveys or the geochemical data and rethink our plans. We talk to our friends on board and our mentors or collaborators at home, or we have coffee and talk with the chief scientists and the technicians. And we usually come back with something better than we had in the beginning.

Being pushed to defend your work happens more often than most people realize, and is a normal and healthy part of science. Ultimately, we scientists – just like everyone else – want to look back at our projects a year from now and feel like we’ve accomplished something worthwhile. And I think we all understand that we’re not the only ones being pushed. Participating in a big science project like an IODP expedition means that your success depends on the success of everyone on the ship, all of whom are getting ready for tonight when the cores come on board.

Photo caption: The sampling table, ready for the first cores from Expedition 354. We will use the colorful dots (on toothpicks) to mark where in the core each of us plans to take samples. Photo credit: P.Selkin