Profile of a Scientist

Getting Caught UP
Safety is Taken Seriously 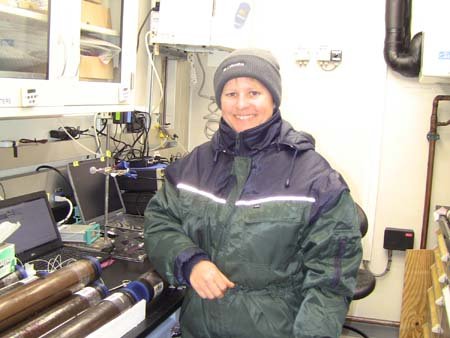 Hi kids! The JOIDES Resolution is travelling to its third location, which is still several days away. The crew is doing some small repair work on the ship’s equipment and the scientists are busy looking at the samples that were collected at our last location. Today, JR is going to tell you something about one of the woman scientists on board.

Britta Gribsholt is a biochemist on the ship. She grew up in Denmark, where she went to school and lives. When she was ten years old, her family drove from Denmark all the way to India, where they lived for a short time. This is where she got the travel bug. She has traveled to many places to do her science research. Out here in the South Pacific Ocean, Britta is interested in the amount of oxygen in the seafloor sediments. She works with one of the other scientists in a cold room. The temperature in the room is 10 degrees C. The cores are in this cold room so that they stay at about the same temperature as they were on the seafloor. This is important when doing this type of science study. Britta drills a tiny hole into the sediment core and inserts a probe which measures the amount of oxygen in the sediments. She will be doing this at each of the locations that we will visit.

In her spare time, Britta likes to kayak and she is fixing up an old farmhouse that she bought in Denmark.