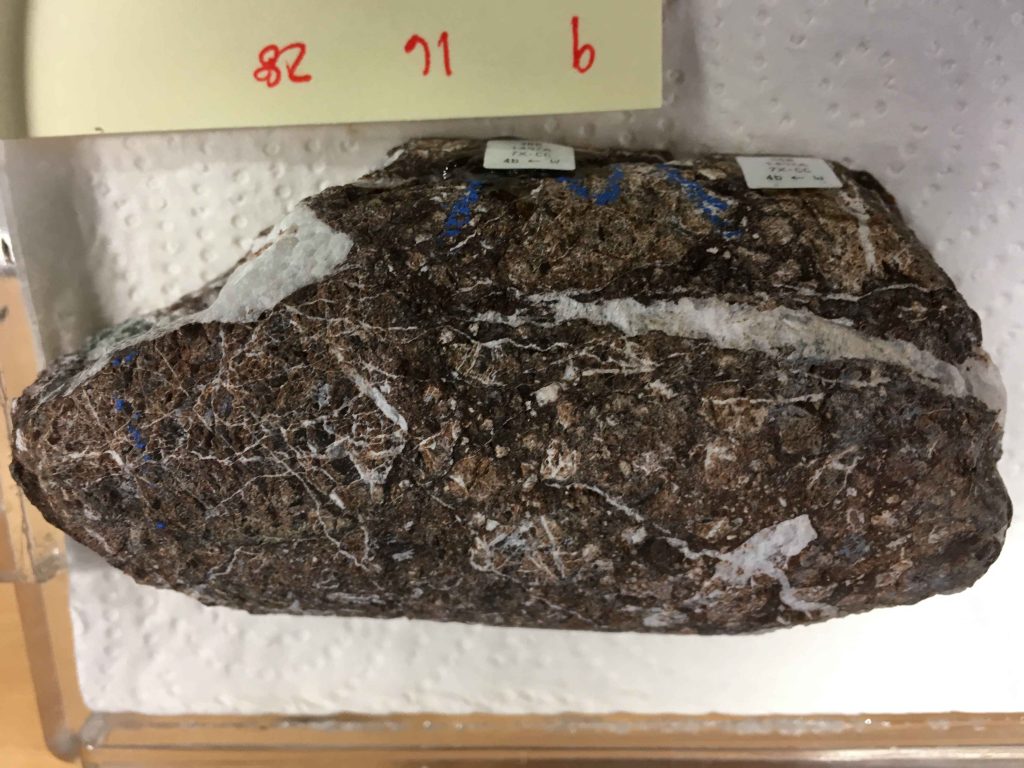 We are at Official Lull 3 in our Mariana Forearc activities, at Fantangisna (formerly: Celestial) Seamount, currently 3/4 of the way through drilling a hole for casing.  The weather has gotten a little spotty out here, so sunrise today was almost a non-starter (the rain finally did break up enough to go out and get some fresh air, if not pretty pictures) and we’ve done the first of the usual before-the-Expedition-Ends activities, the official group pictures on the bow, for which we got a gap in the clouds and (typically…) went on far too long for Night Shift folks as people came up with newer/weirder subgroups of ourselves to photograph.

I’m not sure of the actual meaning of the Chamorro name Fantangisna (the seamounts were all named by Mariana islands schoolchildren as part of a competition) but the “fantastic” implications of the sound of the word seem only appropriate, as comments around the core table came in various flavors of “what in the world…?! 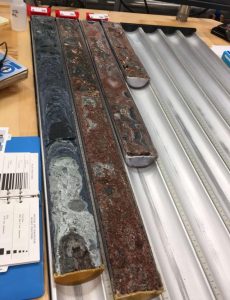 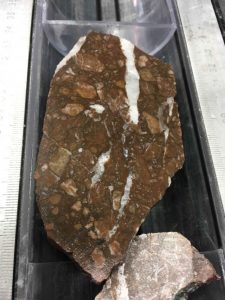 It started off sort of like what we’d seen: blue mud, a bit paler at the seafloor but dark beneath, a bit rockier and more gravelly than the other two seamounts.  But then it suddenly (and inexplicably…) turned red, including some very well cemented red breccias.  And then it changed again: 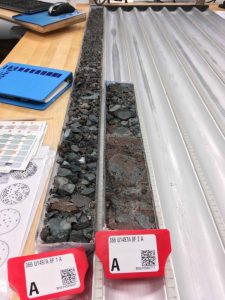 Suddenly lots of gravelly stuff, with graded bedding – like from the slopes of Yinazao!  But this was at the summit of Fantangisna, so there is a lot of puzzlement in the science team as to how this could end up on the top of a submarine mountain.

Every one of the three serpentinite seamounts we’ve visited has been a different animal: Yinazao with its very blue (and very cold, based on the fluid compositions) muds and clasts, Asut Tesoru with its very gassy, very smelly, pale blue-green muds, and now Fantangisna with dark blue, rubbly muds at its summit, overlying red rocks and graded sediments that could come from any hillside in the Pacific.    We all came on board with Sampling Plans associated with proposed science we wanted to do with the rocks and sediments and fluids we recovered.  I expect I’m not alone on the team in having to revise my plan in light of the diverse (and sometimes downright weird) core we’ve recovered so far on the Expedition!

As of the completion of the cased hole at Fantangisna, we will have almost completed all the “requirements” for this Expedition to be declared a success, in that we will have cored and cased holes at three different Mariana serpentinite seamounts.  We do have one last item to fix however, and that relates to a misplaced plug in the cased hole at Yinazao Seamount – it set too shallow, and we actually need to push it down to the bottom of the hole.   We didn’t try to do this when we were there because – well, no one knew how!   Since then there have been a bunch of conversations between the drilling team on the ship, IODP on shore, and the company that made the plug – and they now have a plan, which we’ll execute at Yinazao once we’re done here.  I’m rooting for their very quick success, because if that happens, we get FREE TIME(!!) to drill and recover more core at any of the three seamounts we like until we have to sail to Hong Kong at month’s end.   Given what we’ve seen so far, who knows what we’ll discover with new Cores on Deck!