Sampling in the Core Lab
Rainy Day at Sea 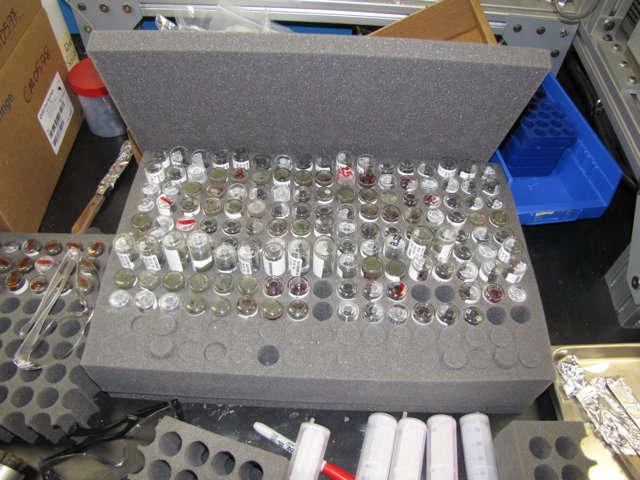 A crucial part of science is data collection. Repetition, duplication, same old thing, time after time after time. On the JR, everyone has their job and they do it for 12 hours. It can really get old doing the same old thing when processing 1 km of rock core.
The core describers have 2 machines that they run the core through. The physical properties team has 4 machines. Send the core in and the machine does everything – measures and records the data. All you have to do is push go. Monotonous! It is a black box. This is one of those jobs that require no thinking. Just loud music or caffeinated drinks. It really is a just a means to an end. You don’t know what it all means until the black box of data is opened. You may not be sure it worked or if it was a waste of time. Being on the JR makes even these jobs better. You are not alone. There are people around with bad jokes, lines from cult films, and good stories.

(there are little foil wrapped samples in this very cool looking sample wrack,
waiting to be measured for the carbon/nitrogen ratio)
On the other hand, some monotonous jobs are more challenging and fun, despite being repetitious. When describing the core, you use your eyes to see the small changes and get a visceral feel for what is changing as we drill deeper and deeper. Green mud. We sorta know what to expect, in general. We are here to see it. It is very special to see the core split open. More sand? More clay? Less shells? What is causing these changes? What time period do the nano-fossils represent? Now that we are at the second site, the comparison questions are also being asked by everyone.
I’ve done some pretty mindless and repetitive jobs in the chemistry lab. We joke that I’ve been promoted from sampler of the clusters and now get paid twice as much as before. I got to transfer water from one type of vial to another vial, 120 samples of less than 5 ml each time. BORING. I brought my computer in to listen to music. Two other very important highly skilled jobs were to open 60 syringes from the sterile wrapping and place them in the acid bath, and to place little white plastic disks into the lids of vials. Oh so stimulating!

I think this part of science is enjoyable it its own way. I like the looking and counting. There is something satisfying in processing a lot of samples. Back in my days of counting copepods for hours on end, I would make goals for myself – 3 samples and then lunch – or something like that. Mandy told me that she has changed her to-do list to her daily goal list and it has changed her attitude about cell counts or writing. These things that must be done to get to the analysis phase. The challenge may not be to really process a certain number of samples, but the challenge is to figure out the story.
Everyone who applied to come on this expedition knew there would be monotonous tasks, but we all wanted to be here for other reasons. There is something amazing about being one of the first to see this tube of rock, from below 500 meters of water, from 350 meters into the ground. I periodically go up to the core deck just to see the rock. Usually it is the same old green mud. Sometimes an ash layer. Sometimes some shell fragments. Last trip up, Michael showed me a healed fault structure. By being here, the scientists get to make the decisions on what to sample, to make those measurements, and to develop the story as we drill.
exp334exp334 nature of sciencenature of science_276
05
Apr 2011
By Jennifer SaltzmanUncategorizedLeave a comment