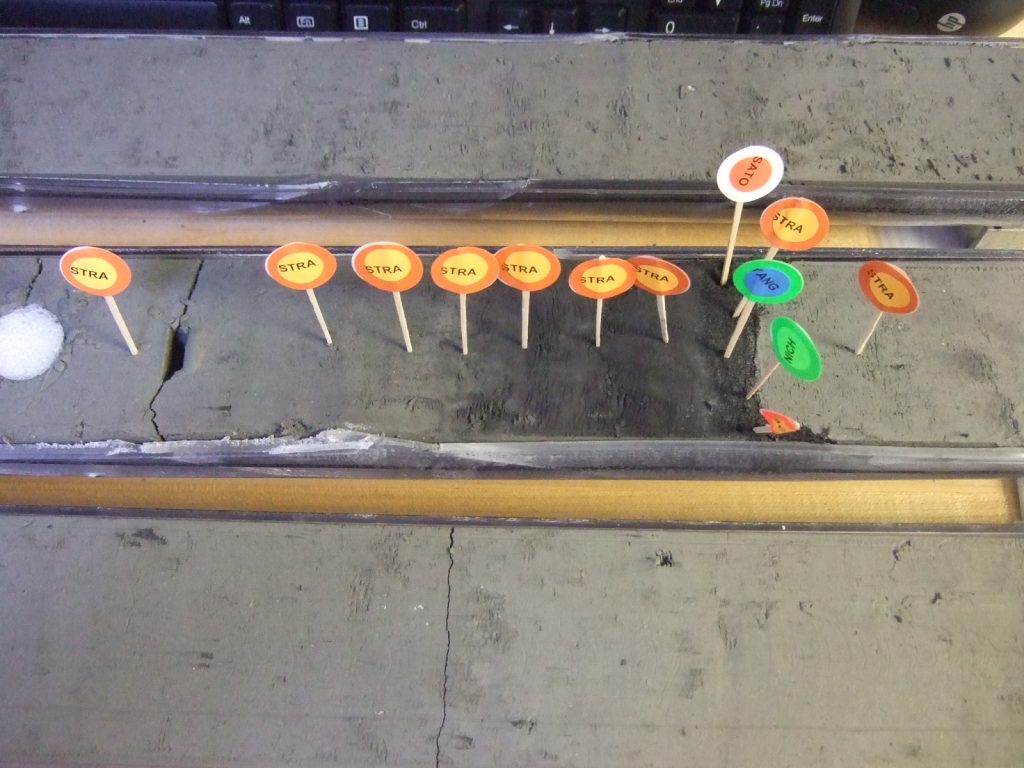 All the cores currently on ship have been measured, tested, and described. Half of each core (which is always cut longitudinally from end to end) has been carefully labelled and packed away to ultimately end up in an international repository, where future scientists can go to re-investigate the material. After all, that particular length of rock from that particular hole can never be brought up again!

So what about the remaining halves? This is where negotiation begins. Each individual scientist has their own research project they are working on. It might be chemistry or geophysics or geomagnetism or palaeontology – but they all want to get their hands on some samples to take back to their home institution. They mark their preferred samples – still in the plastic half-tube – with little coloured flags made of paper and cocktail sticks! I wonder if their first taste of geology was building sandcastles on the beach, decorated with shells and paper flags, and watching the sea gradually erode the sand away to deposit it further out to sea? The rock cycle in action!

Marking territory with flags is not new! Nations always have, and still do, claim new territory by planting their flag boldly in the middle of their newly claimed land or on the top of a seized state building! Explorers of the past planted flags when they discovered new countries and claimed it on behalf of their Sovereign. Individuals or teams reaching a difficult goal also plant flags to show some kind of intellectual ownership earned by endurance, for example Edmund Hilary and Tenzing Norgay reaching the summit of Everest, or Roald Amundsen battling to the South Pole, or the USA first setting foot on the Moon!

Of course with the cores it is slightly different because the scientists want to take the material away with them – and often it is going to be crushed or dissolved or otherwise mistreated until it bears no resemblance to the original fabric! Often it is the smallest horizons that are the most interesting and ‘valuable’ – just like the way rare gemstones or metals are regarded as having the highest value and people are most keen to acquire them. Who wants steel when you can have gold? Who wants glass when you can have diamond?

Luckily scientists are generally all working towards the same goal – of increasing knowledge and understanding of natural phenomena – and so they don’t argue but negotiate a way of sharing or passing material amongst each other. Who knows what new information is hidden in this previously unseen material? It takes patience and determination to be a researcher, but without these amazing people we would have little understanding of our natural world and the interrelatedness of things both above and beneath the surface – including ourselves!