School of Rock: Getting Your Ideas Down a Drill Hole 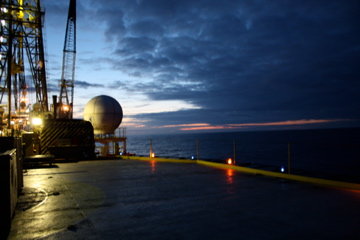 I had always “known” that oceanography was interdisciplinary but the true expression of this interdisciplinarity may be found in what happens on a drill ship.  There are two major aspects of a drill ship that captures one’s attention.  The first is an engineering process that involves actual drilling and instrument emplacement.  This is happens at the drill floor, in the machine shops and the pipe racks.  It’s loud heavy equipment stuff that has to come before the second. As the tool pusher mentioned, “We just do the delivery.” The second is a scientific process that provides ideas for instruments that go down the hole or analysis of core material that comes up out of the hole.  This piece will be devoted to how the ideas turn into science on the drill ship.

So just what have we learned of the science?  One thing learned about School of Rock is that the topics all converge on the scientific goals of the expedition.  This process began with the study of the Integrated Ocean Drilling Program Expedition 328 Scientific Prospectus: Cascadia Subduction Zone ACORK Observatory.  Search this and you will find the links to the details of the cruise. It is to a great degree the contents of this document, gathered in the development of the proposal that sets the stage for a “place” on an expedition or the entire expedition.  The process of being chosen to have your experiment on an expedition is a long one.  Sometimes taking a dozen years.  The proposal goes through many committees in a process that has been described as “nurturing.”  Other aspects could only be described as bureaucratic.  Environmental permits need to be applied for and lists of needed equipment and supplies prepared.  Safety of the drilling is of paramount importance and questions about potential hazards can be a showstopper.  Data must support the goals of the science to be done and the requirement of every expedition is in some way a requirement to produce new knowledge that will allow future expeditions to occur. I have been continually amazed at how knowledge from previous ship cruises, and to some degree, the remaining questions have set the stage for subsequent expeditions of the drill ship.  Peer review is at the heart of all of this and one gets the feeling that the interaction involved with reviewing proposals begets friendships, idea exchange and the cross-fertilization that ultimately determines the direction of future research.