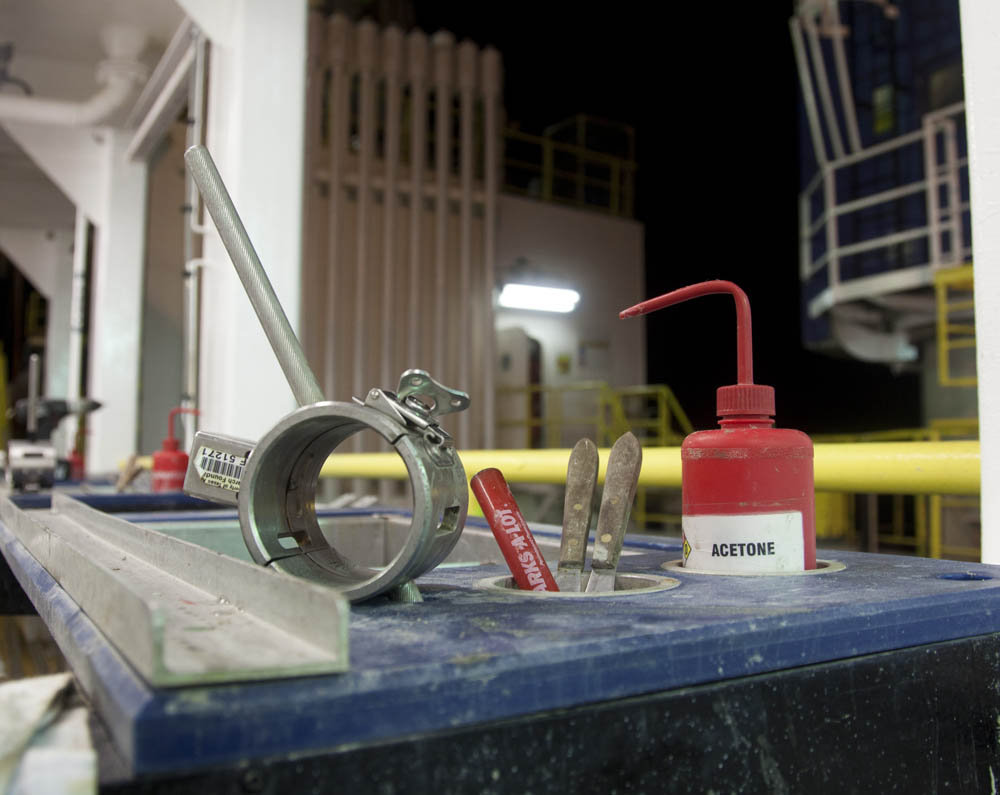 Mission Accomplished! The 340 science expedition has been completed. A total of 434 cores were retrieved with almost 2400 meters recovered from the seafloor. Delighted to report that the scientific objectives of the expedition were accomplished and the cores were beautiful to see as each arrived from the depths of the seafloor. The 340 expedition will provide a new chapter of 'science in search of Earth's secrets.' Thanks to all for the memories and to all our Expedition 340 followers. Enjoy the final science dailies highlighting week 6 science as reported by expedition staff scientist Nicole Stoncik. "On Monday, April 9 we retrieved 18 Cores with 120 m of material reaching 274 meters into the formation. The retrieved material consists of deformed hemipelagic sediment with interbedded tephra and volcaniclastic sand layers of variable thickness. The observed sediment deformation indicates that we are probably coring through a slumped unit.

On Tuesday, April 10 we retrieved 15 Cores with 80 meters of material reaching 400 meters into the formation. The retrieved cores mainly consisted of consolidated hemipelagic sediment with minor amounts of interbedded tephra layers and lava clasts. Sediment deformation is still observed, although it is hard to detect due to deformational features caused by the XCB coring.

On Wednesday, April 11 we finished coring Hole C and retrieved 3 more Cores with 5 meters of material reaching 436 meters into the formation. The last cores consisted of normally bedded, undeformed hemipelagic sediments. This indicates that we have reached one of the major scientific objectives of this site – to drill through the transition zone between the chaotic unit and the underlying marine sediments. After coring was finished, we displaced the hole with mud and started to raise the drill string to prepare for wireline logging. Shortly after 0800 with the bit just above ~300 mbsf, the drill string could not be raised further without loss of rotation. The remainder of the day was spent trying to free the bottom hole assembly from the formation.

On Friday, April 13 after severing the drill pipe that was stuck in the hole, we finished Hole U1400C at 0310 h when the end of the remaining drill pipe was raised above the seafloor. After a 7 nautical mile transit in dynamic positioning mode, the ship was positioned over Site U1401 at 1200 h. We spudded Hole A at 1950 h and we retrieved 4 Cores with 15 meters of material reaching 14 meters into the formation. The cored material consists of hemipelagic mud, coarse-grained volcaniclastic sand and large clasts of andesitic lava.

On Saturday, April 14 we finished Hole A with 7 additional Cores retrieving 1.16 m of material (2% recovery) reaching 82 m into the formation. The material recovered mainly consists of clasts of andesitic lava. Drilling conditions were very poor below the second core due to the coarse-grained and unconsolidated formation. Thus, we decided not to drill deeper than 100 mbsf to not risk losing another bottom hole assembly. However, the material obtained from 0 to 15 mbsf contained deformed hemipelagic sediments and numerous tephra layers – interesting enough for us to want to trace the evolution of this section by coring multiple short holes along a transect imaged by the Aguadomar seismic line. By midnight, we had cored Hole B and recovered 12 meters of material, and Hole C and recovered 10 m of material."

On Sunday, April 15 we finished Hole D retrieving 1 Core before drilling operations were ended in order to allow time to trip the pipes, secure the decks, and begin transit to Curacao.