Enigma 3 resolved : numbers
Enigma 4 : ‘Look’ on the bottom of the see 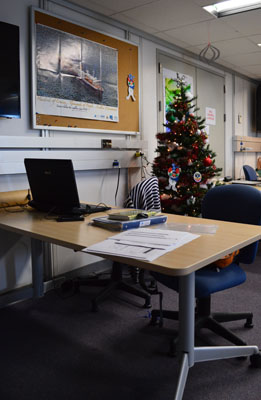 the boat has some pretty cool holiday traditions since we’re away from our families. There’s a gift exchange, caroling, and apparently a pageant….for all who want to participate.

It’s been fun to observe all of these scientists feeling like this is their outlet to be creative. A few have been goading me to make a skit, but I won’t be bullied by them 🙂

I was joking about this earlier today at breakfast with Naomi – one of the scientists on board. I told her “I’m creative everyday. A chance for me not to have to be…I’m taking it. I just want to enjoy the show.” She laughed and said, “You know what you should do? You should go up there and just read a table. Find the chart with the most text we have here, and just read it as dryly as you can.” That was funny enough for me to consider it. I like that idea: scientists being creatives, creatives being scientists.

While on our port call earlier this week, someone decided it was a good idea to save all of the labels from our nights out drinking. Now they’ve been turned into ornaments – I have picture but can’t upload it at the moment 🙁 But it’s just another example of scientists and artists working together to make something we can all enjoy.

Naomi is pretty awesome. She is one of those people you meet in the first few weeks of college, that over the course of everything you kind of drift apart for no other reason than you found your work group…and it didn’t include them. But later you realize that this person is so cool that they understand this fact, and don’t need an explanation. And you realize this is the person that should be in your group. There is a special bond that formed in those first few days or weeks or whatever where you guys were figuring things out together. So this morning, after noticing last night that I’ve been wrapped up with the same people for the last few days, I made an effort to go find her. She’s too cool to pass by.

It also made me miss you Wubby. I’ve got lost of post cards ready to send your way. I just need to get back on land first…