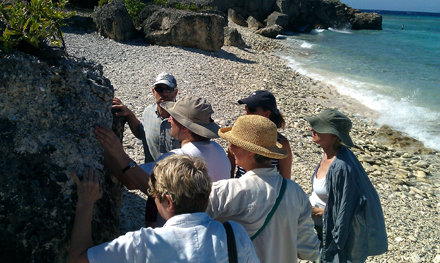 Our learning and exploration of Curacao continue today as the School of Rockers break up into multiple groups and take on a series of lessons and discussion groups in order to take the next steps in their projects and the next steps in their understanding of geologic processes evident on the island. At any given time one group of Rockers was meeting with program evaluators who aided by providing a fresh independent perspective to their projects’ design and helped them hone aspects of the projects plan and implementation strategy. Meanwhile, other groups were working with Ocean Leadership to follow-up from the JR Platform for Education Open Space meeting that took place on shore and improve their ties and with Deep Earth Academy.  And yet another group was on the hunt to increase their knowledge of the Joides Resolution’s drilling capabilities by touring the Core Lab with the technicians who are the first hands on any new core that comes on board! They were taken through every step of the process for a new section of core as it goes from gamma ray testing to having its case laser inscribed with critical information for curation. Following those lessons the group took a short hike to a nearby sand and coral beach where they were challenged to connect the dots of evidence for sea level fluctuation right before their eyes. Rockers considered the formation process required to take the coral skeletons on the beach and turn them into sand and then the cementing processes that would take both of those components and turn them into the three meter high calcareous limestone boulder that stood on the beach. Combining that information with the knowledge of what species existed in the limestone and carbon dating Rockers realized that the top of the boulder was, at one point, the bottom of the ocean at a depth of about three meters, making sea level six meters higher approximately 120,000 years ago that it is today!