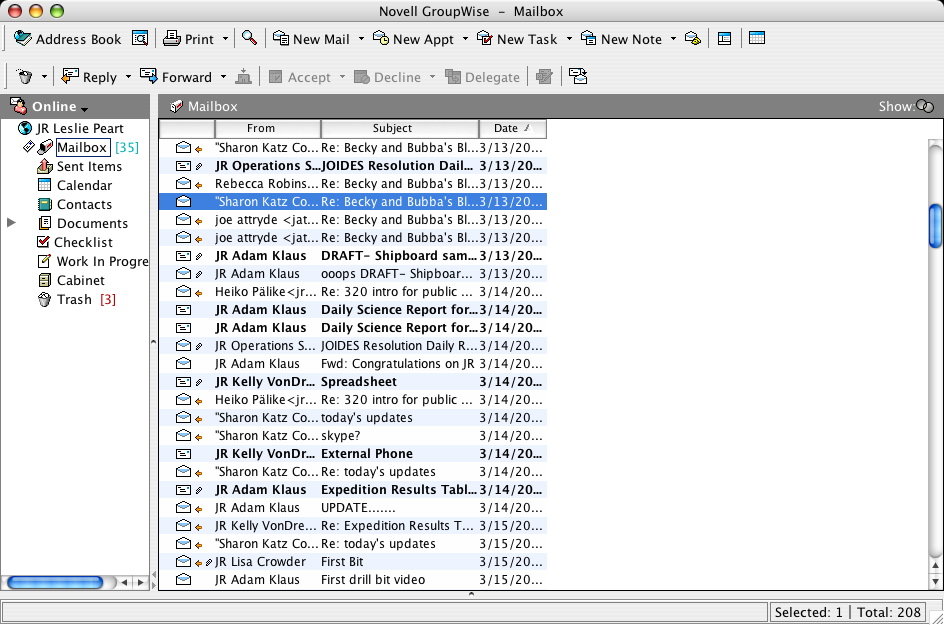 Editor’s  note (aka Leslie):  We’ll start with today’s communications aboard The JR (NEW) and follow tomorrow with Jerry’s great descriptions of communications  aboard her predecessor, the Glomar Challenger (OLD).  I hope you enjoy Jerry’s blog, Shipboard Communications, Old and New, as much as I have.

Today I called my wife to say Hi and to see what was happening at home and, like a good telemarketer, I caught her at suppertime.  Not only was I able to talk to my wife, but my son and daughter-in-law were also visiting so I was able to talk to them, too.  It was a great connection and all I had to do was pick up the phone and dial.  Why is this a big deal?  Because of where I am  — which is the equatorial Pacific, a thousand plus miles from land.  It caused me to think about how far we have some with our communication technology.

The High Cost of Staying in Touch

When the JOIDES Resolution began drilling in 1985, all communication was by phone through a satellite connection.  Messages to and from the ship travelled along this serial connection just like the dial-up some people have today.  This connection also allowed for the installation of a pay phone which allowed the people on the ship to make personal calls.  But with calls costing $10 per minute, this connection was not cheap.  I understand that some people ran up substantial bills maintaining their relationships on shore.

Gradually, the system was expanded to allow some email communication, but at a cost.  Messages were charged by the character (including spaces), so people became very astute in using abbreviations or anything that would shorten the message and still make it understandable.  One had to be careful what you put in the message, as the message had to typed by someone on shore and sent by mail to an address you gave him or her.

Communications from the ship have evolved into what we have now; constant communication with email, phones and internet.  There are still limits because of the limited bandwidth, but generally communication is just like home, it’s just you can’t send or receive large attachments.  I must say it is nice to be able to be personal in your message knowing that it is going direct —  rather than through some typist in Texas.

The phone system on the ship is quite good also.  You pick up the phone and dial who you want, or, if they aren’t at their station or desk, dial a number on the phone and simply page the individual.  It is very easy and very efficient.

Photo:  About a day’s worth of emails on one JR account.