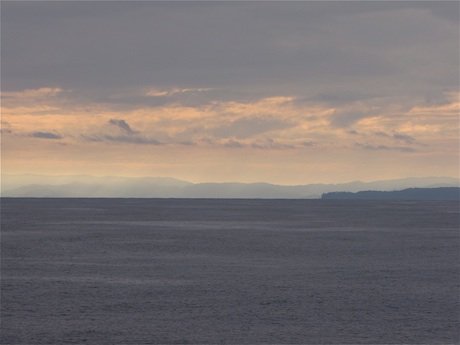 Another 6 am morning shot…Isla del Canos in the foreground and the Costa Rica coastline behind. The coastline was so near and clear, I had to take a photo!

More cores were brought up today and found to have an abundance of greenish gray silty clays, turbidites, dark gray sand layers, and lighter green clays with rare ash layers. At least it is some variation. Fossil examination points to Upper Pleistocene age. They are still finding wood chunks and seashells!  This is a large fossilized seashell.

With these cores and other information, scientists are trying to understand the stresses and strains associated with this particular subduction zone, as this type has never been drilled before.  Exciting stuff!  They will be attempting to drill down to at least 500 meters below sea floor (mbsf), and also do downhole logging to find out more information about the surrounding sediments.

When the sediment cores become more lithified (rock-like), sometimes the scientists must use a special drill to get a sample out of the core. This tool is much like the drill that we use to penetrate the ocean floor since it is hollow in the middle, spins rapidly, and also uses water at the same time to cool and lubricate the drilling process.

In the photo above, paleomagnetist Luigi Jovane uses the rock drill to take a sample.

Scientists place directional marks on the piece of core to tell them which way is up.

Most afternoons, you can find several people walking or jogging in circles around the helicopter deck for some exercise (20 meter diameter) before dinner. There is a gym onboard, but it is also nice to get some fresh air! Today was no exception.  I had said that I would not take any more sunset photos because they are all starting to look alike…but tonight was the most exceptional colors I have ever seen!  These photos are not enhanced! It was peachy orangey beautiful!

And, to top it off, the full moon was rising on the other side of the deck!

Signing off from above the subduction zone…