Six Week Malaise and its Impact on our Food

Meet your Expedition 350 science team!
Bird on the Wing 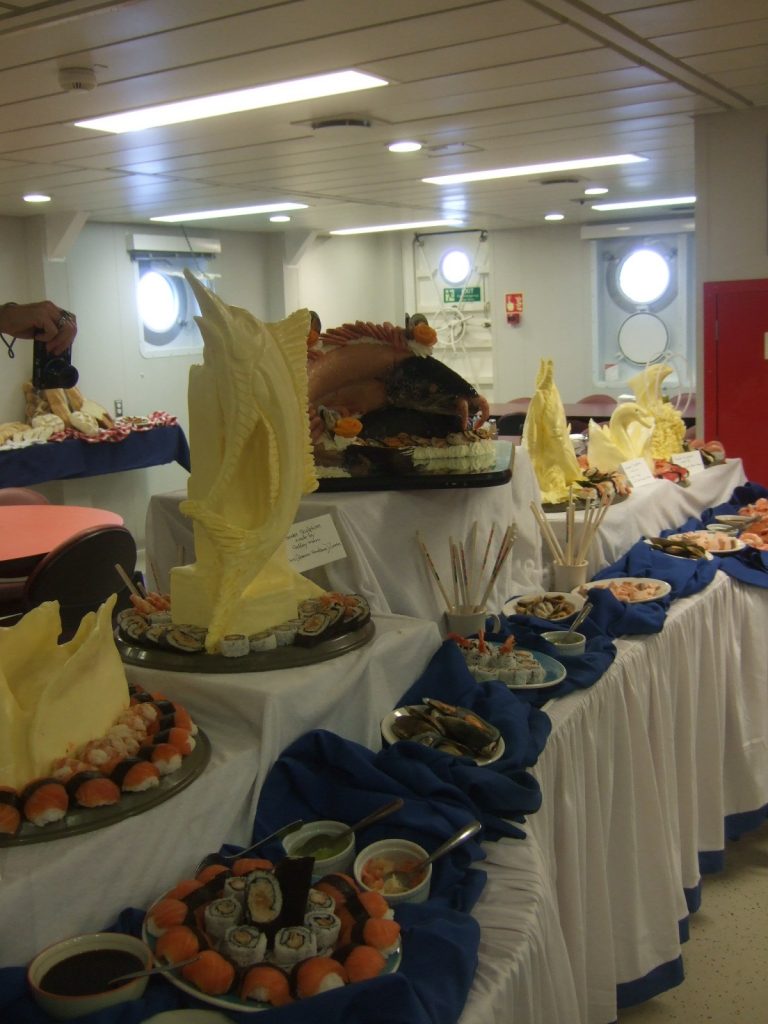 There is a strange malaise that begins to descend on the ship in week six – cabin fever! (Definition: a reaction that takes place when a person or group is isolated and/or shut in a small space, with nothing to do for an extended period; extreme irritability and restlessness; distrust of other people and an urge to go outside even in the rain and dark.) People have been wandering around the ship muttering unintelligibly to themselves about mud and allowing themselves to grow beards (even some of the women). Others have been releasing their frustration by throwing purple bags of rice, made from discarded T-shirts, at cups of coffee, walls, doors and each other. Some people have even resorted to dressing up as wizards, and making up concoctions with cubes of rock and liquid nitrogen. (This may make sense to those of you who have been following our Facebook page – or not!)

I believe the entire crew is also suffering from this problem. Sorry – I meant the ‘Entier’ domestic crew who have fed us and cleaned our cages so brilliantly for the last few weeks. They obviously share our need for novelty, so they put on yet another fabulous buffet lunch today. It was a veritable feast of fish and chocolate (not in the same recipes) but this time, instead of vegetable-based sculptures, the art-work was made from margarine!

Now I knew about this in advance from one day last week when I went into the galley area looking for our Camp Boss, Paul Trainer, and found him up to his elbows in what looked like butter, rolling a lump the size of a cricket ball around in his hands. Intrigued, I quickly shut the door. He tried to escape but his hands kept slipping off the door handle, which offered me the opportunity to interview him in the act of creation.

LA:  What on Earth are you doing with so much butter?

LA: (cautiously):  Er, it depends what kind of secret it is.

PT: (walking into the cold store): Come with me – I’ve got something to show ye.

LA: (even more cautiously and nervously looking at my watch):  I haven’t got long….

PT: (triumphantly pointing to a huge butter swan): There! What do you think of that!

LA: Oh! How long did that take to make? Is it pure butter???

PT (disappearing behind a set of racking):  Come on, come on…there’s more!

LA (keeping my back to the door):  How long have you been making these sculptures? Is this your hobby?

PT:  I just like it. The rest of the crew have been making them too! Would you like to have a go?

(At this point I realized I may have stumbled upon a secret underworld of margarine sculpting with Paul as the ring-leader, spreading his habit through the captive staff and that I might be the next victim!)

LA: I’m not sure I could cope with this much butter.

LA (sliding into his trap): That is really amazing – I wouldn’t have thought margarine had enough strength to allow such detail!

PA: It is a wonderful material to work with, the way it slides through the fingers…..

LA: Paul, when did you first realize that you were attracted to margarine?

PT: It started when I was a wee child when I stuck my finger in the margarine tub, and then it progressed to rolling balls of it and then I just – well – I just couldn’t stop myself. Eventually I was stealing margarine from the fridge and making little people to play with.

LA (remembering her child psychology lectures): Were you a lonely child, Paul?

LA:   When you say made …. Paul, did you make all your friends out of margarine?

PT: I’ve got to go now and play with, I mean make, some cakes…. (walking rapidly away)

LA: (calling after him) Paul, will you be using margarine…?  These sculptures are really amazing  – I can’t believe they aren’t butter!

(My grateful thanks go to Paul Trainer, Exp 350 Camp Boss, for talking to me. After rehab he is now able to cope with using chocolate-covered polystyrene sculptures when margarine is in short supply – which it now is.)

NOTE: I may have got some of the details wrong but we are now into week 7……..