Two days out to sea
Getting Ready 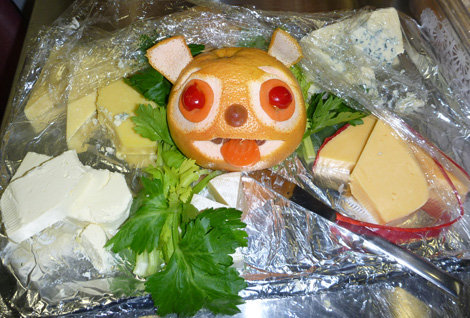 Day 4:  We had a very calm morning and afternoon, however, towards the end of the day we changed course to avoid a storm.  This storm has 55-63 mph winds at its core, and was heading straight for us.  We’ve changed course to hopefully avoid the worst of it, but there is no doubt about it, we are in for a rough night.

We are trying to go around a Storm Force 10, which if you look at the link above, is almost a hurricane.

But it’s not all seriousness.  For lunch today, the guys in the galley decided to have a bit of fun, and created the fruit guy!  He obviously loves to hang out with the cheeses though, just look at him cheesing it up! (See above — you can click and make him bigger.)

As I said earlier, Lambchop has decided to give us all a tour of the Physical Properties stations on board.  She will talk about one of these a blog post, and maybe later, she’ll head out and explore the rest of the ship.  She is very dedicated to her work!

As Physical Properties Scientists are the first group to measure the core, starting with them makes sense.  Since she wants to follow the core through its journey, she is going to start with the Catwalk.

This is where the drillers hand the cores over to the technicians onboard.  Each core that comes up is up to 9.5 meters long (over 30 feet).  This length is hard to move around, so the first thing that happens is the techs break it up into 1.5 meter (about 5 feet) pieces, which they then bring inside.  While they are doing this, a few samples are collected for special studies, but most of the core goes inside and waits for a few hours.

The reasons it has to wait for a few hours is before the core can be measured, we have to let it warm up some.  Cores come out of the ocean at about 0 C (or 32 F).   She needs to do this because most of the things she is going to measure change when the temperature changes, and she does not want the measurements changing as we measure them.  So, in order to minimize this change, the first thing Lambchop does is allow the cores to come to room temperature.  This usually takes 3 or 4 hours, during which the cores sit on this rack.

As you can see, Lambchop is ready to go, but the cores need to warm up some, so we will leave off today.

Check back in later for the next step!