Sunday: The JR Comes Into Port!

The Big Picture
Reflections on the School of Rock

After a luxurious extra 1.5 hours of sleep, we convened on the Mezzanine of our hotel for a workshop on science communication tools produced by the UCMP (University of California Museum of Paleontology) in collaboration with HHMI. But before diving into the nitty gritty of the tools themselves, we started with an activity. Lisa handed out small cards labeled things like “plate tectonics”, “deforestation”, and “extinction” and participants were asked to break them into two groups based on whether they were drivers or impacts of global change. All groups had trouble with the task because some of the cards didn’t fit cleanly into either of these categories and some cards could be both! We are then introduced to the Global Change resource on the HHMI website, and realize that there is indeed a third category: “How the Earth System Works”. These earth processes act as filters through which the drivers can create outcomes. For example, a measurable outcome such as fluctuations in the proportional abundance of different species within a community (the “species population” card) can be influenced by the introduction of invasive species (a cause of change) but only when understood through the system process of species interactions. In other words, only by understanding the way in which the world works can we predict realistic outcomes to our drivers of change. 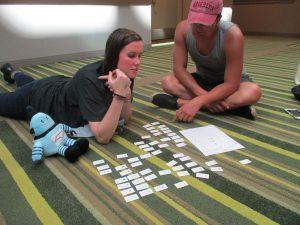 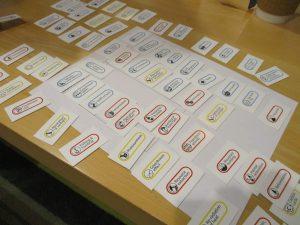 The Global Change tool can be used by educators to introduce students to linked factors of global change as well as by researchers hoping to convey their findings to broad audiences.

The second resource that we looked at, Understanding Science, had already been introduced by Lisa on an earlier day. What’s really cool about this tool is that it really highlights the nonlinear and complicated nature of science. This model of how the scientific journey really works can replace the much more simplified, linear scientific model that is so often taught to students. Some things to emphasize to young learners are 1) that collaboration is key in science 2) science is creative, complicated, and nonlinear, and 3) science can be a fun and dynamic process!

In the afternoon we drove out to Cabrillo National Monument for the moment we had all been waiting for – the arrival of the JOIDES Resolution!! From our perch high up on the Point Loma Peninsula, we witnessed the JR coming into an American port for the first time in a decade. After a week of talking about the ship, it was finally here! 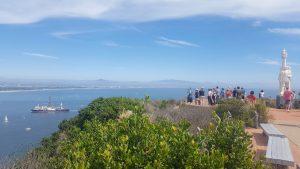 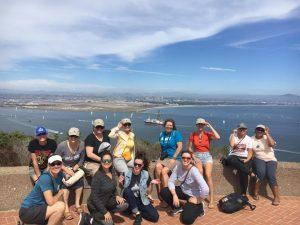 Before leaving Cabrillo National Monument, a group of us decided to check out their tide pools! Despite the tide not being low enough for ideal tide-pooling conditions, we still saw our fair share of anemones, barnacles, and other critters. And of course, being School of Rockers, we admired the beautiful stratigraphic layering in the cliff face.

Overall we spent a lovely day learning about scientific communication tools, seeing our favorite ship come into port, and enjoying the natural beauty that is San Diego. Stay tuned for further adventures with School of Rock!

19
Sep 2019
By School RockSchool of Rock, Scientific OutreachLeave a comment