Thank you to the Siem Crew (the best problem solvers)

Busy, Busy! Bouncy weather, new Sites, lotsa core, and the vagaries of deep-sea drilling…
You have to go where to get microbes? 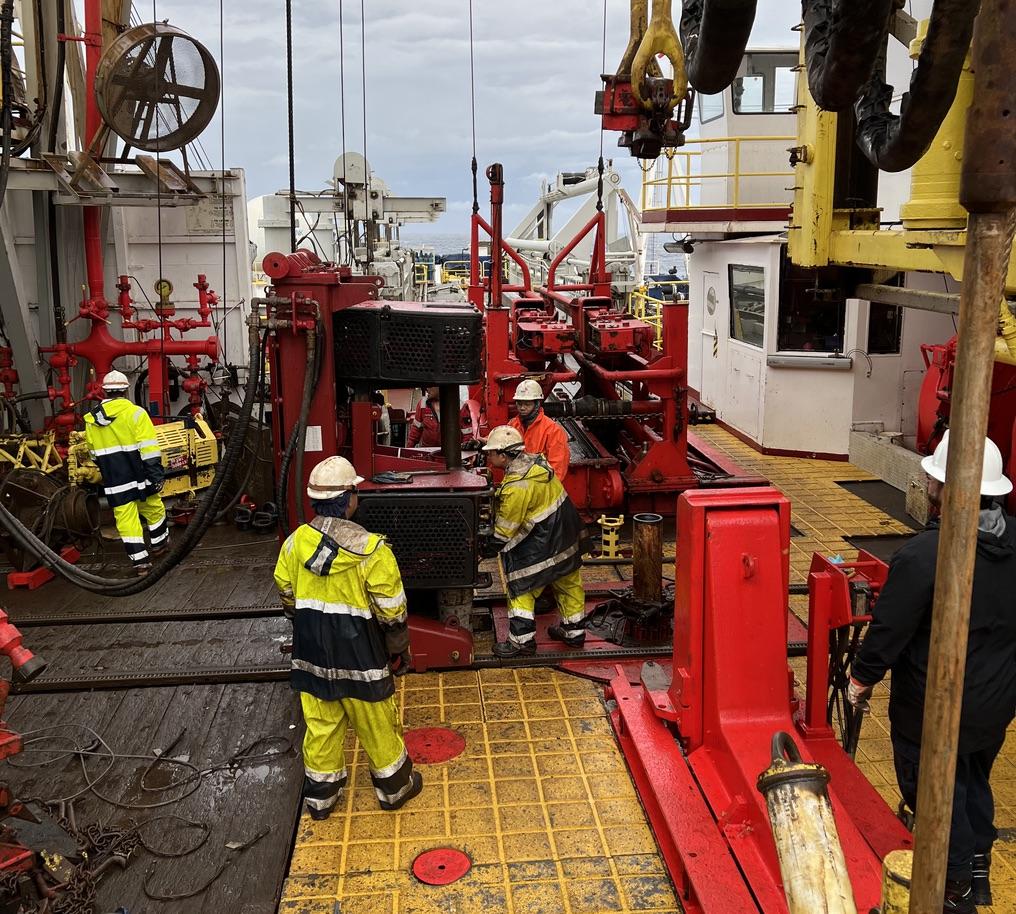 On July 8th, we were in the process of drilling and getting sediment cores almost every hour and half. The science party was busy with describing, and analyzing the new cores (except for the petrologists who were writing their reports about hard rock cores drilled earlier in a different hole). We were drilling deeper into the hole and knew that we should be hitting hard bottom soon. Generally, when we anticipate said hard bottom we would switch from the Advanced Piston Corer (APC) system to Extended Core Barrel (XCB) coring system. APC coring uses a piston that shoots a barrel down into the sediments below the drill bit to collect the sediments. In contrast, XCB coring doesn’t use a piston but rotates as it grinds away the surrounding material. Therefore, it is better at coring hard rock or hard sediment than softer sediments but results in increased disturbance of the cores. We don’t usually start with XCB coring because it disrupts the soft sediment cores too much. Based on experience in a previous borehole, a call was made that we could switch to XCB coring after the next core came up (Core 12). Then I get a text message from the tool pusher “oh no”. Their equipment gave off readings that indicated that the drill bit may have hit hard bottom way sooner than we anticipated. Even more concerning was that the core barrel was stuck. It would not come up, no matter what they tried to pull it back up.

All sorts of scenarios were discussed. The most plausible explanation at the time was that we hit hard rock at the end of the full stroke, when the APC piston was fully extended. This could easily bend the APC piston and get it stuck in the drill string. Think of APC drilling like using a straw to poke holes in a cake, and pull out little mini core cakes. However, if you use that same straw to poke a hole in a cookie or candy bar, it won’t be strong enough to go through and can get bent.

However, the Kinley Cutter and hammer actuator stopped too high up in the drill pipe leaving approximately 2600 meters of core line in the drill pipe. So, now we had an additional problem. There was a significant amount of loose wire in the drill pipe. This is a problem because instead of either pulling out just the core barrel or just the drill pipe, the Siem crew now have to pull up both while trying to unspool the wire line at the same time.

Keep in mind that the Siem crew also works on 12 hour shifts, so they have to keep updating each crew team on what happened, what was done, and what they should do as this problem continued on into the next day. Essentially, the Siem crew had to bring up the drill pipe one stand at time to pull the drill pipe out of the hole, cutting and removing the remaining core line at each stand of pipe. Note that we had over 4000m worth of drill pipe deployed. On a good day with no issues, it takes 12 hours to pull up the drill pipe, dismantle, and re-rack it. The fact that the rig crew had to cut and remove the core line for each drill pipe pulled up added a whole lot more time to the process. They can usually trip (a word used by the crew to mean pull up or put down) about 20 stands an hour, but the process of having to secure the line at the top and bottom of the stand, then cut the wire at each stand connection slowed this process down to about three or four stands per hour. The rig floor crews on both shifts worked endlessly, and at one point got in a really good routine of pulling up one drill pipe section at a time, and attaching the wire line to a winch so we could hold onto it as we separated it from the drill pipe.

In the end, it took about two full days (day and night), lots of cutting, winching, and separating to get to the core barrel.

So what was the problem? Did it actually hit bottom?

What is good to remember is that the whole time we were trying to get this core barrel free, there was a core of sediment still inside it. So, once the core barrel made it to the rig floor, we got the classic “core on deck” call. The technicians and scientists gathered on the catwalk to receive the core and continue the the South Atlantic Transect project.

This whole situation just reminded us that we should expect the unexpected, and handle it with as much skill and grace as we possibly can to get through it. In the research proposal and operations plan created for the expedition, some buffer room for delays are added but you never really know how much time you might end up needing. So, yes this did cause a delay in the scientific exploration but all we can do is push through and get as much knowledge about the ocean floor as possible. The Siem crew did a fantastic job problem solving and choosing a path that maintained the safety of the ship, the progress of the scientific plan, and maintenance of the rig floor equipment.