Signs of Life Where You Least Expect It
Exquisite Worlds 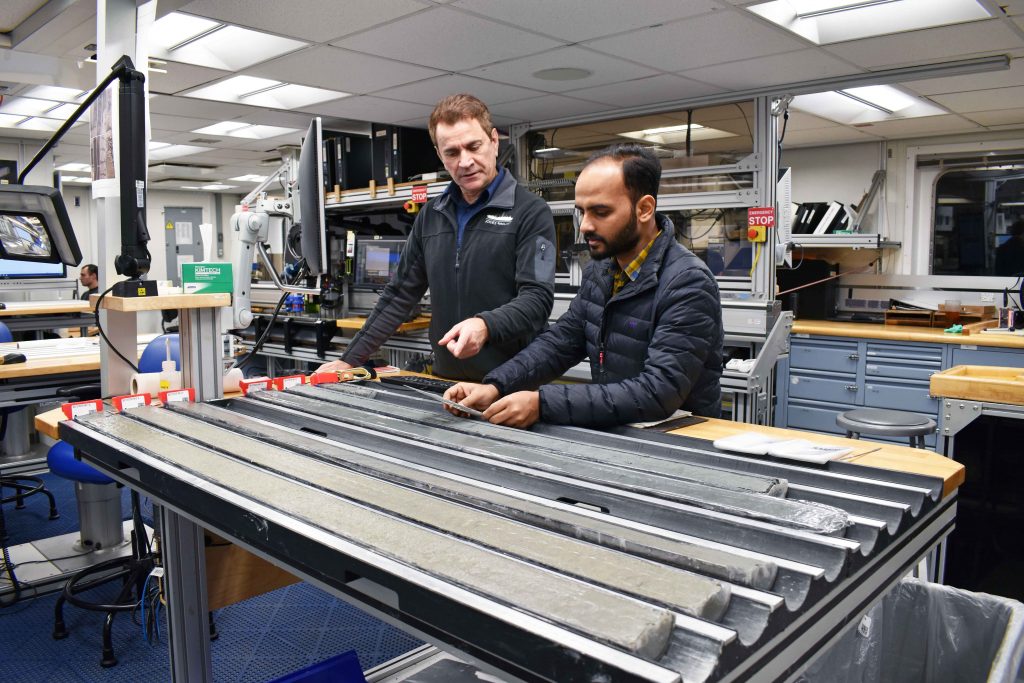 The crossover is the daily meeting of science teams between shifts. We share what we did during our shift and discuss any interesting findings. We also make a strategy and plan for the next day. There are five groups working together on the JOIDES Resolution. They have different interests and expertise. So, I decided to do a crossover with my fellow scientists working in different labs.

The core descriptors of my sedimentology team examine the sediment using hand lenses and microscopes. Sedimentologist Mutsumi visually observes and identifies the different colours of the sediment, and she counts and assesses the stones and rocks present. Fabricio uses a machine called the SHMSL to digitize the colour of sediment cores.

Then I met with Brendan, with whom I hang out frequently over a cup of espresso. He explores the magnetic properties of the sediment we collect. I asked him about these and their use in climate change studies. He told me that Earth’s present magnetic field is considered normal, but the planet’s polarity changes periodically. These changes, as recorded in the alignment of minerals, can be used to find the age of the sediment. This is known as magnetic stratigraphy. We can also learn about the type of sediment and the environment in which it is formed, which gives us an idea of its origin. The magnetometer is used to perform this analysis.

After that, I met the paleontology group, who tell us the age of the sediments. Jonathan, Yuji, Iván, and others shared with me about their work. They study the many tiny fossil skeletons of tiny organisms present in the sediment and determine which species are representative for a particular sediment sample, which they use to determine the age of the sediment. In other words, we can say paleontologists know the birthday (or the first appearance) of the organism and the age of its disappearance.

I also chatted with the geochemists, who do different chemical analyses of the sediment. Some of them are busy detecting the presence of flammable gases, methane and ethane, which may be a safety hazard. I met Vinny, who works the night shift as a marine lab specialist. He told me about measurements he does and how he uses different analytical instruments. Vinny is a chemical engineer and possesses degree in oceanography, so he finds it very exiting do various measurements and then relate what he finds to what happens in the ocean. Zenon Mateo, also a marine lab specialist, told me how he transitioned from sedimentology to core logging. To him, IODP expeditions are a great learning platform.

Another group works on the physical properties of the sediment. I asked Xufeng and Michelle about the different measurements they make. Sediments are made up of different material and minerals, which make the sediment hard or soft, light or dense, and so on. Physical property specialists measure these properties: they take the weight of sediment and measure the volume, and they pass different kinds of waves through the sediment. This helps characterize changes in porosity, density, and structure, among other things. Recently, IODP also started taking X-rays of sediment! Yes, now we have X-ray vision and can see inside the cores. Marga, who works on the X-ray, said this technique is very helpful in doing research on dropstones (the stones and rocks carried by icebergs from Antarctica, which eventually drop down through the ocean and can tell us where in Antarctica the iceberg came from). Finally, I met the stratigraphic correlator Professor Sidney Hemming, who sits with big computer screens with many curves, lines, and graphs on them. Her job is to determine whether we’re collecting a continuous record. And if some of the sediment cores show gaps, using their physical properties, she compares information between adjacent holes to create a continuous climatic record.

This is how we work on the JOIDES Resolution, and this teamwork between scientists of different disciplines leads to the reconstruction of the climate record and unearthing earth’s mysteries. And during leisure hours we hang out in the galley and go outside to watch icebergs, penguins, and sea birds near the ship. We talk about different kinds of foods, customs, and traditions we have in our country. This is a crossover on multiple levels on the international expedition that is Iceberg Alley.