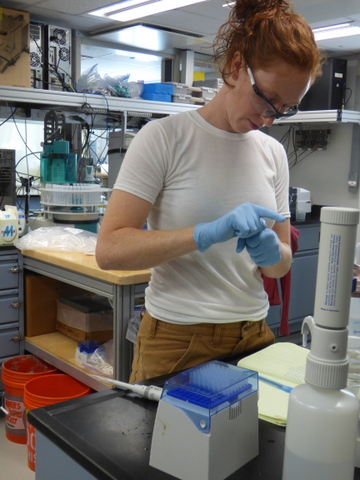 Today I’m going to bring you to the geochemistry lab.  On this expedition, both lab techs and four of the five scientists are women – who says science has limited opportunities for women?

The chemists are gathering a plethora of data, from sulfates and nitrates to alkalinity and pH.  This is a once-in-a-lifetime opportunity to collect data spanning 5 million years in a crucial region for understanding past climates, so they are collecting samples for everything they think might help them in their investigations, whether current or those that might arise in the future.

However, the key question they want to answer on this expedition is “how did the glacial ocean system work during the last ice age 20,000 years ago?”  Current data indicates that the glacial oceans were stratified very differently than the current oceans.  Why should anyone (other than the scientists) care about this?  Because the ocean is one of the major sink holes for CO2, and the glacial oceans stored much more CO2 than the interglacial oceans do (i.e. more of it is released into the atmosphere during warming periods like now, and CO2 is one of our identified “greenhouse gases”.)

So how are they going to answer this question?  Measuring the stratification of our current oceans is relatively simple.  CTD’s (like the one pictured here from a NOAA ship) are a common tool on board most oceanographic ships, measuring conductivity, temperature and depth, which then provides an up to date temperature vs. salinity graph at any depth.  To get this same graph for the single point in time 20,000 years ago, they need to look at a number of things.

To get an idea of the temperature of the deep ocean back then, they need to look at the difference between the oxygen isotope concentrations.  Like any element, there is a natural, relatively well known ratio of its various isotopes.  But when glaciers form, the H2O evaporating out of the ocean and then forming ice tends to contain the lighter oxygen isotope, leaving the heavier oxygen in the ocean water (this also lowers the ocean level and increases salinity, since salt does not evaporate.)  However, benthic forams (remember, some of the microfossils from yesterday) also store the heavy oxygen, reflecting the water they live in as well as its temperature.  In order to figure out the temperature and salinity, the geochemists have to measure heavy oxygen levels and salinity values in the water they squeeze out of a series of 5cm thick sediment samples extending 150m down.

This allows them to create a diffusion profile that they compare with models in order to reconstruct the salinity and oxygen isotope value of the last ice age.  They then measure the heavy oxygen levels in the benthic forams from the last ice age.  Combining the benthic oxygen value and the water oxygen value provides them with a temperature value.  Heck, so easy, right?

This temperature/salinity point will either answer the question of how did the glacial ocean system work, or it will raise a slew of all new questions.  Either way, the scientists will undoubtedly be happy!