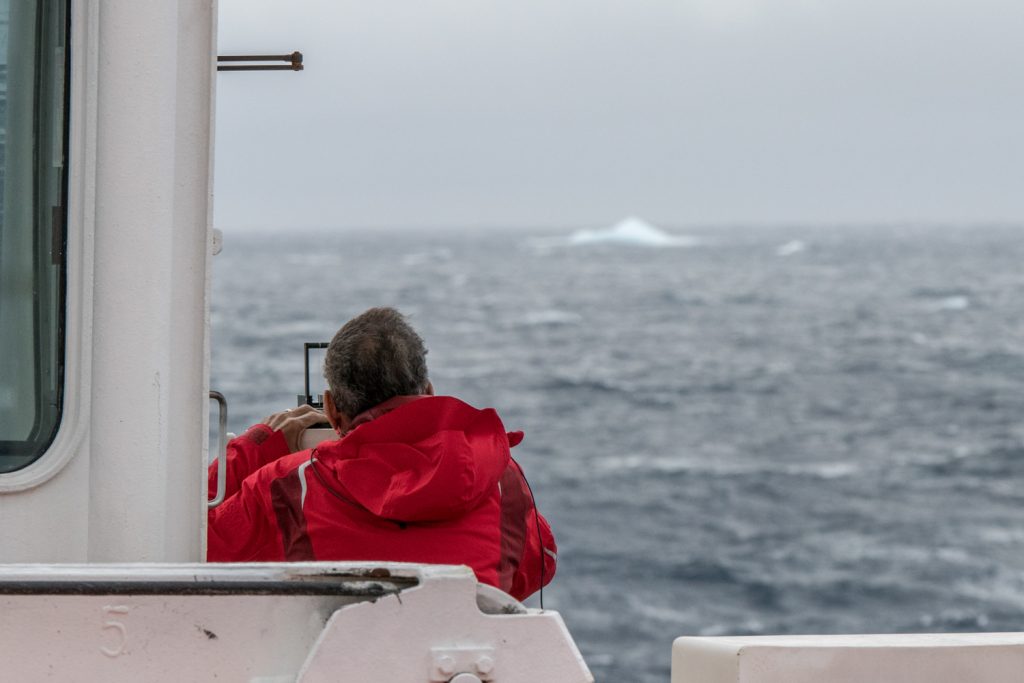 The Iceberger: Captain Diego Mello, who observes the icebergs in Iceberg Alley from the JOIDES Resolution to keep us safe. When I said, “Mr. Iceberger,” he chuckled and replied, “That’s a good one. Yes, I am the Iceberger.”

When I am off my shift, I sometimes visit the bridge, where the captain operates the ship. The Ice Observer also works on the bridge. Diego Mello, who is the official Ice Observer on IODP Expedition 382—Iceberg Alley and Subantarctic Ice and Ocean Dynamics, is actually the captain of the research ship the Sikuliyaq operated by University of Alaska, USA. He is always on the bridge with his binoculars, marine navigation charts, and calculator. Sometimes he observes icebergs visually, and sometimes he uses the radar, always predicting the trajectories of icebergs. Icebergs are hazardous and could damage the ship. Very careful observation and tracking of icebergs is needed when we work in a remote polar area like this, some thousands of kilometers from land. Once, Diego told me about his experiences at sea and with icebergs. He received most of his training when he worked with the US Coast Guard. He worked in Greenland, where sea ice and icebergs are a major threat to cargo and research ships. He also worked on various ships in the Great Lakes between the USA and Canada. In Arctic waters, icebreakers clear the way for research and cargo vessels. He said, “Icebreakers are a must for maneuvering ships in sea-ice prone areas, otherwise the ships are locked in the icepack. Ironically, most of the ships I worked on didn’t have icebreakers.” Once during teatime, Diego told us about T-time—the time needed to pull up the drill string and start the transit. It depends on many things, like the speed of the iceberg towards the ship, the depth of the drill, wind velocity, and other factors. He marks three zones—green, yellow, and red—on the chart, based on the movement and distance of the icebergs approaching the ship.  Green is the safest zone, which we can work in without any alert, but the bridge continues to observe the icebergs. The yellow zone is a three- to five-mile radius from the ship. So, this is likely to be safe, but the drill team is informed. When an iceberg comes closer than 3 miles from the ship, we are in the red zone. This is the time when we pull up our drill sting to 50 m below the seafloor. This is a wait and watch condition. When an iceberg comes closer than 1 mile, we abandon the site and move to a safer location. Diego emphasized the team effort that keeps huge ships like the JOIDES Resolution safe while working around icebergs. Each day, he sends us the ice report, which keeps us informed about the ice and iceberg activity in the ocean around us. He never forgets to include an interesting ice term. Some icebergs have a tabletop appearance, some look like islands; some of the icebergs also hide behind another. Technically, they may be called tabular, blocky, pinnacle, and other shapes depending on their appearance, structure, and size. He enriches our ice knowledge and vocabulary.

It is a pleasant and once-in-a-lifetime experience to be on the bridge of the JOIDES Resolution and meet people who see the sea differently. We wish Caption Diego a safe and adventurous life sailing in Alaska where the Sikuliaq awaits him.