The JR has Stairs 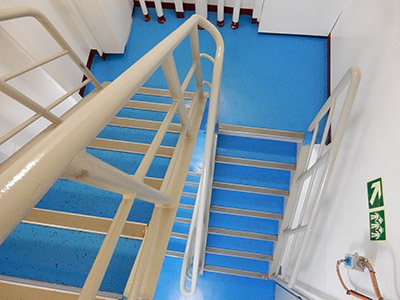 I have every intention of spending some time each day in either the exercise room, below deck, or on the helicopter-pad in the stern of the ship.  But even if I turn out to be too intent on my work to do so, I will get exercise on this ship, in the form of stairs….

My cabin is in the lower ‘tween deck, which is as low as you can go, at least among the sleeping cabins for the science crew.  To get there I go down 1 very steep stair from the main deck (mess = food) or 2 very steep stairs from the fo’c’s’le deck (conference room and chemistry labs).

Then there is another flight of stairs (the main stairwell as shown in the first image) up to the core deck (where I work).  After that I can go up one more to the bridge deck, where the co-chiefs have their offices and great access to the outdoors. One of my favorite spots is on top of the bridge (yes, one more flight of stairs, outside this time).

And, by the way, to get to IT (where you need to go to post blogs or to get on the internet that you are on_ you go down one more level below the upper ‘tween deck.  And to get to the gym from my cabin it is up to the main deck and then down another set of equally steep stairs.  Apparently the most in-demand equipment in the gym is the tread-master, but I can’t imagine why, we tread plenty just getting to it.

As many of you know, Michigan is pretty flattened out, partly as a result of the glaciers that came and went over the last million years.  I have been up and down more stairs in the past two days than I remember at home in the past several years.