The School of Rock – Documentation Goals for the CORK

Science Careers are Cool
A Galaxy Beneath the Seafloor 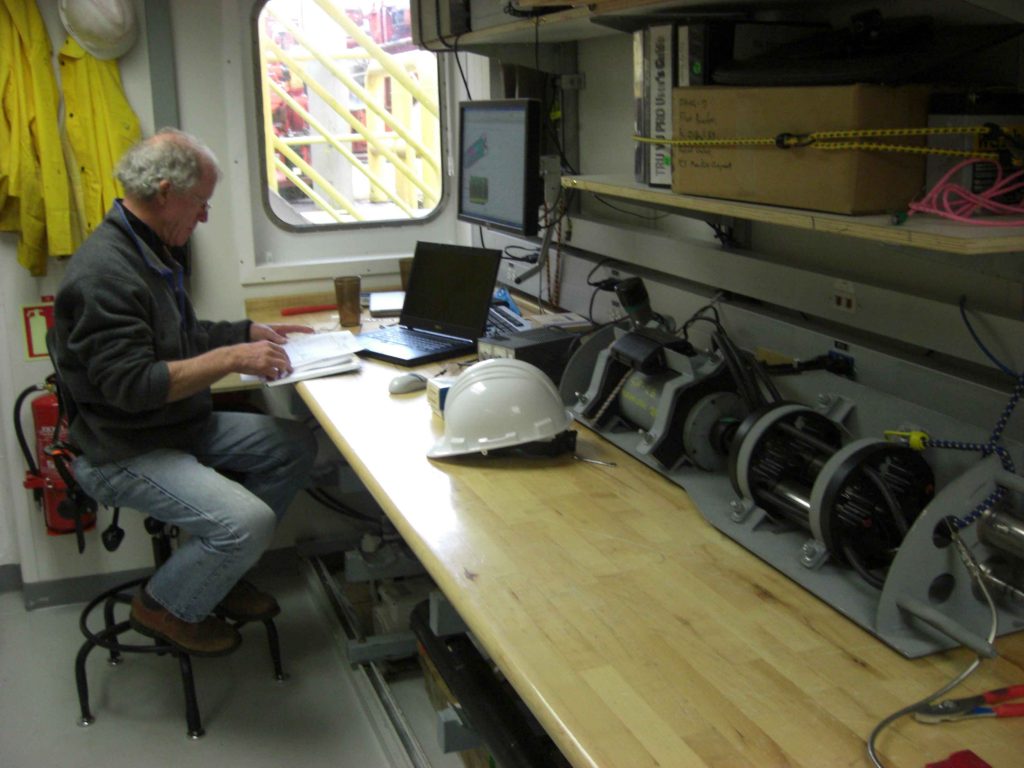 What can we hope to get from the CORK? I’d like to explore the path from initial goals developed by Earl Davis (pictured above with the ACORK instrument package on the bench to his right) and his team and what can be hoped to be derived from the data from this and other CORK installations. The multiple goals of the observatory according to the IODP Expedition 328 Week 1 Report “the observatory will allow documentation of the average state of pressure in the frontal part of the Cascadia accretionary prism, the pressure gradients driving flow from the consolidating sediments, the mode of formation of gas hydrates, the influence of gas hydrates and free gas on the mechanical properties of their host lithology, the response of the material to seismic ground motion, and the magnitude of strain at the site caused by episodic seismic and aseismic slip in this subduction setting.” We will explore some of these in greater detail.

The CORK is an instrument that is set up to measure the pressure of fluids at various levels in the sediments of the accretionary wedge in a subduction zone setting. Instruments in the CORK are connected to screens emplaced at various levels in a borehole. Instruments measure pore fluid temperatures and pressures, and after baseline formation pressure is determined, changes in pressures over time. Data from CORKs are periodically retrieved and, more importantly, they can be connected to a cabled observatory such as Neptune for continuous broadband data sampling and continuous dissemination to the scientific investigators and anyone interested in the data via the web.

The first goal of the CORK is to determine the baseline formation pressure of the setting. Undersea fluid pressures are usually hydrostatic, responding to gradients, density of water and gravity. But in places where there is tectonic consolidation and loading forces present, such as in the accretionary wedge portion of a subduction zone, the hydrologic system is over-pressurized due to the squeezing effect on the sediments. Heat can also create an over-pressurized condition. Pore fluids travel through the sediments and can carry the pressure signals from the squeezing over dozens of kilometers. So the second goal of CORK emplacement is to gather a long-term record of pore fluid pressure variation over time in the subduction environment.

Since subduction environments are also the location of rare but very destructive high magnitude (>9M) earthquakes and their resulting tsunamis, it is important to gather data on pressure variations over time to obtain clues about the environment. Because these pressure variations have been shown to be good proxies for the kinds of crustal behavior present within, beneath and landward of the accretionary wedge, long-term study will hopefully provide greater understanding of this behavior and the hazards that result. Some of the areas where more knowledge would be helpful include information about the relationship between fluid pressure changes and gps constrained deformation of the continent. It may also provide information about which parts of the subduction zone are slipping with little friction and those which are slipping in episodic jerky motion accompanied by tremors having regular periodicity. In other places, portions of the plate rocks are effectively “locked” for long periods of time and will yield, and yield their secrets, only in dramatic seismic events that require a long period of data acquisition to capture. The same is likely to be true of tsunami passage over the monitored areas. Slips, slumps and slides, some associated with gas hydrates, as well as turbidity flows may also be illuminated by the long-term recording of the fluid pressure record.

Will the results provide for the prediction of earthquakes? Probably not in the sense that weather phenomenon can be predicted. The time scales are very different and as Earl Davis puts it “geophysics often is done in an information starved environment.“ Still, it was basic research on the structure and processes operating in supercell thunderstorms which yielded the predictive information about mesocyclonic circulations that we find as rotating symbols on television tornado warning maps. Perhaps fluid pressure changes will allow us to better see the context, “the forest” of movements in and around the accretionary wedge which will allow a greater understanding of individual earthquakes, “the trees”. This might increase the body of knowledge related to seismic risk and might enhance understanding beyond that which can be calculated from the radiative patterns of seismic signals . There may be more going on in earthquakes than we can currently know and hopefully, years of data about changes in fluid pressure entering the screens below the CORK will fill in some of the big gaps in our knowledge about the hazardous environments near subduction zones.