The “Unsung Hero’s” of the JR.

The technical staff on the JR, are a very experienced and resourceful group of professionals and as true professionals, they have a job to do and they do it to perfection.  They work as a team on a 24 hour rotation, with the night shift working midnight to midday and the day shift, working midday to midnight and meeting for a 15 minute cross over between shifts.  They are busy people, but I managed to convince a few to write a profile about themselves. They are the ‘unsung heros‘ of the JR. Please find below: 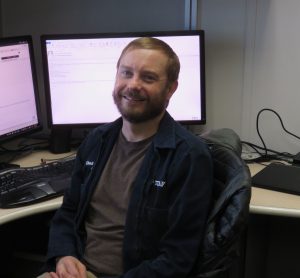 I live in Bryan, TX and work at the Gulf Coast Repository (GCR). I got my B.S. degree in Geophysics (minor in Geology) at Texas A&M University. I started as a student worker in the GCR. When a Curatorial Specialist position was open in December 2006, I started working full time in the GCR. At this time, the ship was in Singapore being refurbished. I started sailing on the JR on its transit out of Singapore in January 2009. I serve as the Curator on scientific expeditions. This job is similar to that of a museum curator. Museum curators may preserve artifacts and art where I preserve the core material that has been collected by the Deep-Sea Drilling Project (DSDP), Ocean Drilling Program (ODP), and the International Ocean Discovery Program. I have sailed 19 times as Curator and have visited places that I never imagined I would see. Each scientific expedition is unique, and this keeps my job interesting. Each time I go out I learn something new. I also have the privilege of spending two months at sea with world experts in paleoceanography, volcanism, microbiology, geochemisty, and geophysics. At this time, I have made friends from all over the world and this has opened my mind to the world. I am away from home from 4-7 months out of the year and this transient existence can sometimes become grueling. However, the payoff of facilitating groundbreaking science and traveling to exotic destinations is a great payoff. I have visited places that I never could have imagined (e.g. Antarctica, New Zealand, Japan, the list goes on). The most memorable thing that has happened is seeing the icesheet off of Antarctica, landscapes off of Baffin Bay, drilling into sediment that was deposited when Antarctica was tropical, curating deep crustal gabbros, drilling into the Shatsky Rise supervolcano, the list goes on. 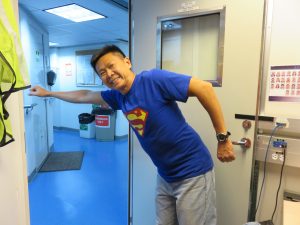 My name is Minh.  I live near College Station, Texas, USA.  I’ve worked in IT for 20 years doing mainly desktop automation.  I started sailing on the JR in 2015 as a Marine Computer Specialist.  I joined IODP for the chance to travel and to do something meaningful.  The best part of my job on the JR is that I get to be useful.  My least favorite part of my job is leaving the ship to go work in the office.  Every day on every expedition brings new challenges and opportunities for actions, thoughts, and memories, which I will cherish long past my days on the JR. 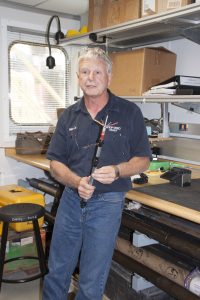 I am from South-Africa where I studied at Pretoria Technical College while doing an apprenticeship in Aeronautical Radio/Radar. I was employed as an Industrial Instrumentation and Telecommunication technician for most of my career and accepted a position as Electronics technician with IODP onboard the JR during 2001.  I took up position as Electronics designer in College Station TX in 2005 and was involved with the design and building of multiple electronic downhole and other instruments. After 10 years in TEXAS I moved back to SA and are stationed onboard the JR again. Will always be enthusiastic about attaining expedition objectives, but now also looking forward being home spending time with my little granddaughter.

I live in the USA (Texas.) and studied Marine Sciences and Oceanography. I have a Masters of Science in Physical Oceanography.  I am a Research Associate on the JR. I help provide data for scientists by curating, cleaning and cutting rocks, sand and mud (samples) along with the other technicians.  I also worked in the publications department for ~ 3 years.  Expedition 371 is my 7th expedition. I worked in Pubs. for ~ 3 years and ~ 1 year as a marine technician.  Traveling is a big reason continue this job. I also enjoy exploring and learning about the planet.

My name is Dan Marone and I am working on the JR as a core lab technician just for Expedition 371: Tasman Frontier. Off the JR I am currently living in Nyack NY, working at the Lamont Doherty Earth Observatory as a lab technician in both geochemistry labs and the core repository. I graduated with a B. S. in Geosciences from the University of Arizona in 2016. Since then I have been working at Lamont as well as in the field with scientists from all over the world on the PLIOMAX project mapping paleo-reef deposits above modern sea-level. The main goal of the project being to better constrain sea-level rise in past warm periods of the Earth’s history during times when there was more glacial melting and higher atmospheric CO2 content than today. 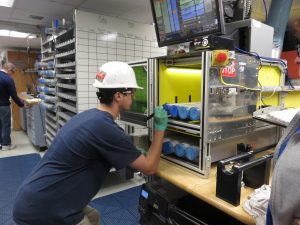 Ever since I was going to school for geology I’ve been hearing about how I should apply to sail on an expedition with IODP from my mom who has been on the JR as a scientist and even on a short transit through the Panama Canal with her father along as well. As soon as I heard there was a need for extra technicians on this leg I knew I wanted to have this experience. It can be a bit tedious having nowhere to go and nothing to see but the ship day in and day out, but it is nothing compared to how rewarding it is to be a part of such an amazing operation out on the sea bringing up rocks millions of years old that can give us such insights into the history of our planet. It is never a dull day on the JR working with so many great people, whether it is running around the labs as core comes up every 30 minutes, having a movie night with co-workers after a long shift, a four-hour dance party halfway through the expedition, or just watching one of the many peaceful sunrises out on the deck. 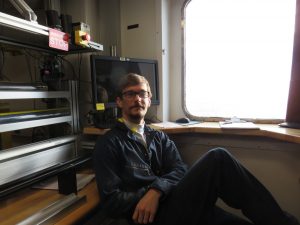 I am a native Texan currently living in the City of Austin, but originally hailing from the greater Houston area. I received a B.S. in Environmental Studies from Texas A&M University, graduating in 2014. I have put my interdisciplinary major to use through internships ranging from West Nile Virus vector mitigation in my hometown to assist Post-Doctoral Researchers at Rice University with their work on invasive species dynamics. After graduation, I spent three years working for Texas’s state environmental regulatory agency- the TCEQ- as the lead coordinator for several programs in the Environmental Assistance division before leaving to take up the opportunity to sail on the Joides Resolution as part of Expedition 371. I am using this opportunity to experience hands on scientific work, as well as the chance to sail as inspiration for applying for the temporary position.

Mike is originally from Detroit, Michigan, where he was hired by a future employer from his graduating class and he moved Houston, Texas. He currently resides in a small rural Texas community called Giddings located half-way between Bryan/College Station and Austin, Texas. Mike attended Ohio Institute of Technology (OIT) in Columbus, Ohio, where he received a diploma as a Certified Electronic Technician.

Texas Instruments, Inc. (TI) hired Mike upon graduation from OIT.  For several years he performed electronic technician work on various integrated circuit fabrication equipment and massive printed circuit board production equipment.  He then had an opportunity to apply for and was accepted into an apprenticeship program for computer maintenance on their Advance Scientific Computer (ASC) mainframe systems, a project developed in the 1960s. (Their systems could fill an aircraft hangar in size, their “100MegaByte” disk drives were 7 feet square, they also used the ARPANET-forerunner to the Internet).  Upon completion of their apprenticeship program Mike was assigned to the US Navy as a civilian contractor at the Naval Research Laboratories in Washington, DC for two years.  This launched his career into IT.  After TI Mike accepted a position for 12 years as IT Supervisor for a data center at a Texas rural electric utility serving 70,000 customers.  His current role aboard the JR is as a Marine Computer Specialist, Mike is responsible for IT operations onboard the JR. 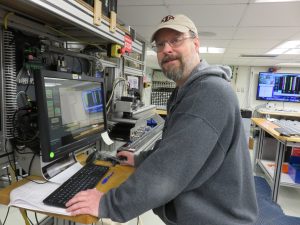 Mike has been sailing on the JR for 20 years.  This is his 42nd expedition (Expedition 371). He enjoys working on the JR, as the data center he administers, is aboard a ship that travels the world.  What other IT role can make that claim?  He enjoys having a lot of autonomy to perform his duties.  His responsibilities are broad from workstation/server configuration and setup to satellite communications and everything in-between. What he enjoys most would be the variety of tasks and projects that he gets to work on.  He finds that there is never a dull moment and boredom is not an option.

The part of his job that Mike likes least, would be understanding and complying with various airport and airline regulations from around the world.  He commented that there can be many surprises if you are not aware.

What has always amazed Mike on his journeys on board the JR has been the power of the seas and their effect upon the JR.  Prior to the refitting of the JR in Singapore of 2008 the JR was a different ship structurally.  Today the JR feels more stable to me than it felt prior to 2008.  During the refit more ballast tanks were added within the hull to offset superstructure changes made above the main deck.  This has made for a heavier and more balanced ship.  However, his most memorable moments were during rough seas standing on the bridge and watching the bow of the ship submerse or submarine under gigantic waves.  The bow would just disappear and this wall of water would be heading to the bridge deck outside.  The sensation of standing on the bridge observing this event felt like the cresting and decent of any roller coaster of your choice at any amusement park you know.  Oh, and you still have that wall of water heading your way. 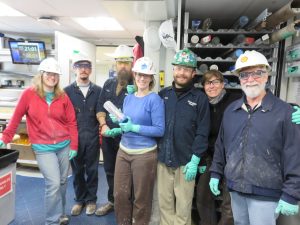 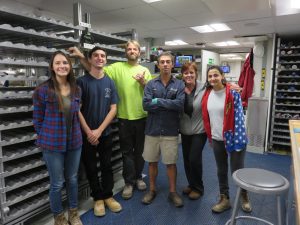 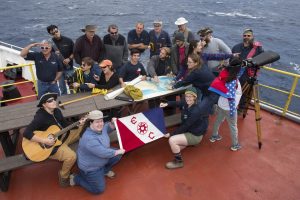 The team displays The International Explorers Club Flag:   The Explorers Club is an international multidisciplinary professional society dedicated to the advancement of field research and the ideal that it is vital to preserve the instinct to explore.