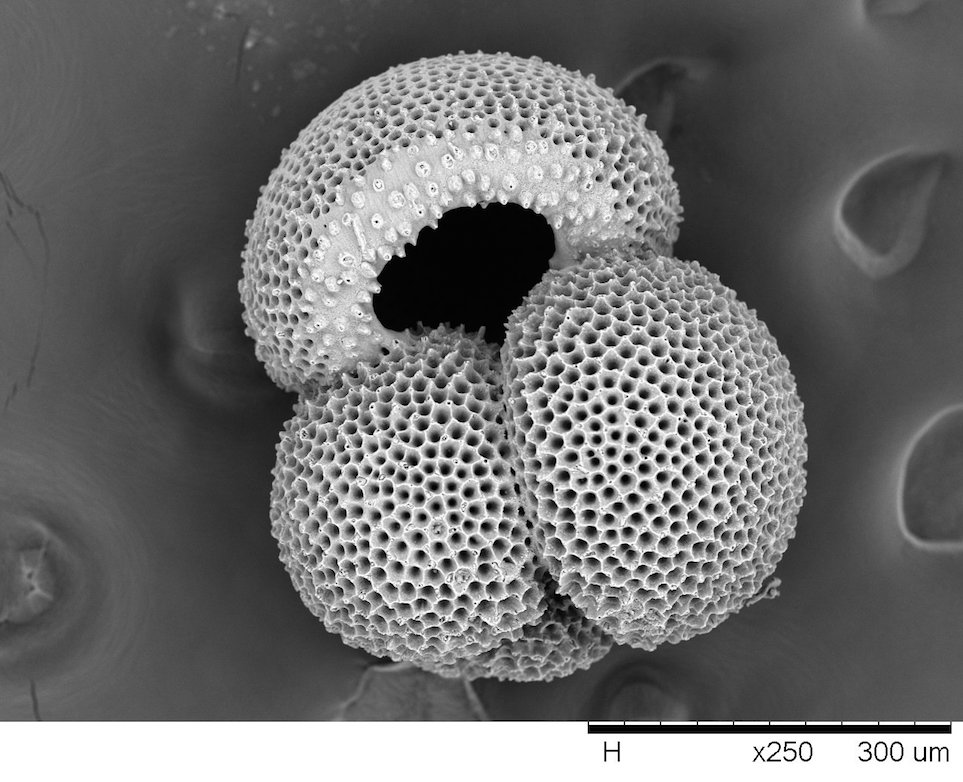 Globigerinoides ruber is very common in the modern ocean. It is a surface-water specie of foram (short for Foraminifera). This is an SEM image made from a G. ruber foram found in the shallow sediments of the South China Sea. A scale is given in the lower right of the image. The shell oxygen isotopes and Mg:Ca ratios of G. ruber is often used to indicate the sea surface temperature. When the shell colors turn red, we call it Globigerinoides ruber pink, which only appears in the late Quaternary (0.12-0.40 million years ago) in the western Pacific region.

Finding G. ruber in ocean sediments indicates a very young age, i.e., Quaternary just a couple of millions of years old. This may seem old; however, some of the sediments and rocks located a few kilometers beneath the seafloor in the South China Sea should be many millions of years old because continental breakup is estimated to have started here about 30 million years ago.

The second and third photos show a much older cousin to G. ruber. This is Globiquadrina binaiensis. I’m showing ventral and lateral views to illustrate the fact that G. bianaiensis has a “face”, i.e., even though it looks like it has been split in half it is a whole foram. Globiquadrina binaiensis existed during a very short time period, the early Miocene (19.09-19.30 million years ago).

Foram Experts: Haiyan, Pai-Sen and Fabricio are Paleontologists in the Biostratigraphy group. They search under the microscope for forams that are biostratigraphic markers to help provide age constraints on the cores.