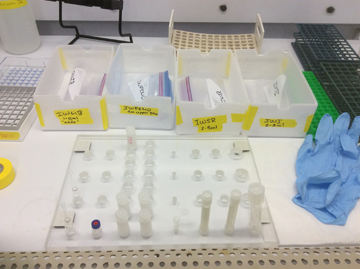 We arrived at the first site early this morning, only a few hours after I fell asleep.  But I’m told the thrusters were deployed (more on them from Agnes) to stabilize the ship as we lowered the drill string.  Or should I say the highly-trained ship crew lowered it — I would have been entirely unhelpful.  The process is, as Marta, the lead geochemist put it, “a ballet” of heavy parts and machinery.  Each 30 m section has to be pulled off the deck so it dangle vertically over the drill port in the ship and then lowered down through the derrick until it’s clamped and held just above the ship’s deck.  Then the next piece and the next, each section the same procedure, as the assembly creeps down through the water column.

But for now, I’m going to focus on what we’re doing up here…or not doing.  Some members of the crew are extremely busy preparing software or getting sample requests ready, but for us in the chemistry lab?  Yeah, we’re a little bored.  We have most everything ready to go, from the chemicals and sample bottle’s we’ll need, to the core squeezers that we’ll use to extract pore water from sediments (the sediments have plenty of water, but it turns out even solid rocks can too — stay tuned to this channel).  And all my materials are laid out.  As the Organic Geochemist on board, I’m in charge of making sure we don’t encounter bizarre kinds or quantities of hydrocarbons that might indicate we’re close to a natural gas pocket, oil, or a layer of methane hydrates.

Those last ones are really neat — basically under high pressure and at low temperatures, water molecules can arrange themselves into a kind of cage structure with open space in the middle.  Think of something like a whiffle ball; water molecules arrange themselves into a lattice, and then in the middle — at the center of the whiffle ball — is one lonely little methane molecule, CH4, just happy to hang out there.  The trouble comes when you lower the pressure or increase the temperature on these guys.  The cages fall apart and release methane.  And that’s pretty bad since while methane doesn’t last long in the atmosphere, it is a very potent greenhouse gas (catastrophic release of methane from methane hydrates has been implicated in the very odd blip in earth’s temperature around 55 million years ago, known as the Paleocene-Eocene Thermal Maximum).  So we definitely want to be careful if hit anything like methane hydrates while we drill (the problems with hitting oil are more immediately apparent).  And that’s why I’ll take a little bit (just a few grams) of each sediment core that we get, put it in a glass vial, and bake it to release what gases might be present.  I’ll inject the gas produced into a nifty little thing called a gas chromatograph to separate different gases and see what hydrocarbons came out of the sediments.

If you think about it, separating gases is kind of tricky.  For example, air is about 78% nitrogen, 21% oxygen, 1% argon and then lots of other things like CO2, H2O, CH4, etc. that don’t amount to even one percent altogether.  But how could you tell that’s what’s in air if you didn’t know (or have access to Wikipedia)?

Well, if you’re a very clever chemist, here’s what you do: you take a long (say 100 foot) and very thin tube (like half a millimeter or 0.02 inches thick) and give it a the thinnest bit of a coating on the inside (the ones we’re using having a coating just 0.1 microns thick, about one tenth the thickness of a human hair).  So now you have this really long piece of hollow spaghetti (they’re yellow, so that’s what they look like — check out the first attachment) with a fancy…something…coating on the inside.  What next?  If you’ve chosen what type of coating to use very carefully, the gases you want to separate will each interact a little differently with it when they flow past.  The coating should basically be “stickier” for some of the gases than for others, so while some go through very quickly, others keep getting caught and move much slower.  And remember the spaghetti is really long, so the time between when the quick and slow gases get to the end is long enough that they get separated fully.  We can then use a number of different detectors (each is good at detecting certain gases but not others) to see when different gases emerge.  Basically we end up looking at a graph of detector response through time, and that graph will show a peak if the detector picks up something (have a look at the second attachment).  Finally by calibrating the instrument with known gases, we can tell when certain ones should reach the detector.  Voila, as some of our French scientists might say — we’ve figured out what gases are present.  And — stick with me here — if we integrate the area under each peak, we can tell how much of each we have running around.

But for now the gas chromatograph sits waiting, just like me, for the first core to come aboard.  And  to ensure I don’t get into any chemical mischief while I wait (it happens…often), I will say goodbye with a poem of my own composition.

The squeezers are aligned with precision and care,

In the hopes that fresh mud will soon arrive there.

And the vials for samples lie in their own holder,

just waiting, it seems, for us to grow older.

to keep our fresh cores deoxygenated.

The gas-chromatography oven is whirring,

and the auto-titrators are set to get stirring.

Marta is prepping a lecture beside me,

and I have updated our collective supply sheet.

The day’s gone as slow as the continents drift,

the core will come soon — I hope we’re still on shift!

’til we meet again,