Tracy’s Way – Love of the Lab

Teachers: Go ahead! Apply! Your district will be proud of you!
Tracy’s Way – Exploring the Lab 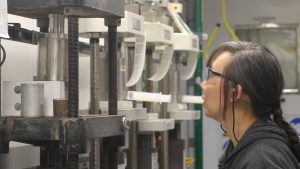 Hi everyone! My name is Tracy Quan, and I am sailing as an Inorganic Geochemist on Expedition 369 on the JR. My usual day job is as an Associate Professor in the Boone Pickens School of Geology at Oklahoma State University, where I do research on characterizing past depositional environments using a wide range of biogeochemical proxies, or more simply I look at the different chemical elements held within rocks to understand the environments the rocks were deposited in. 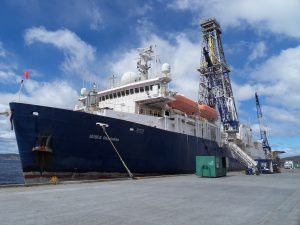 This is my first expedition on the JR, and my first with the IODP program; I’ve sailed on smaller ships as a graduate student, but that was many years ago. I joined the expedition because I am interested in analyzing Ocean Anoxic Events, or OAEs. These are periods of time that occur during Earth’s geologic history where scientists think that a significant portion of the oceans were anoxic, or did not contain oxygen. In contrast, the majority of ocean basins today are predominantly oxic, so geologists are interested why OAEs have occurred in the past: What causes them? How often do they occur? How long do they last? Why do they come to an end?

The ocean sediments are a good place to look for answers to these questions as they preserve a record of past water column environments. Different scientists will use different techniques to look at different aspects of the problem, like the shells of certain organisms, or a certain type of mineral. 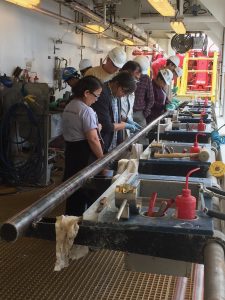 One of the goals of this Expedition is to obtain several sections of sediments that correspond to a couple of the OAEs in the Cretaceous period (145 to 66 million years ago). My project is to measure nitrogen isotopes and other elemental proxies in this section of sediment that can tell us how much oxygen there was in the water column at the time; we can’t measure paleo-oxygen levels directly, so we have to infer oxygen content using other chemical species that can be measured. Once I make my measurements, I can compare them with data from the other scientists on board, and with other records from other locations to get a bigger picture of what happened during these OAEs on a global scale.

I plan to write a few more blogs while on board the JR, so hopefully, I’ll get to say more about my work and my background. In the meantime, here are two sets of 5 things about life on the JR:

5 things that are harder on board the JR than on land:

5 things that are easier on board the JR than on land:

EXP369geochemistryLife aboard
12
Oct 2017
By Charissa RuthExpeditions, Geochemistry, Life at SeaLeave a comment