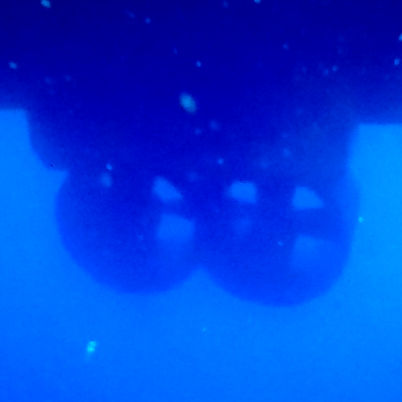 One of the strange things about traveling on a drill ship is, that after going straight ahead for hundreds of kilometers, you immediately stop in the middle of the ocean in a spot that doesn’t look any different than the rest of the sea. And then you stay there for days, sometimes weeks.

The reason for that is obvious: to drill successfully, the ship has to keep its position very accurately.

To perform that task, the JR has 12 so called thrusters,moveable propellers, two of them inserted in the stern. The rest of the thrusters is lowered when the ship reaches its postition. That’s how this looks seen from the deck:

The result is stunning: the JOIDES stays in place like a Californian sequoia tree.

(which is really bad news for those with weaker stomachs on board). The heave would eventually destroy the drill gear, so it has to be compensated. This is done by the heave compensation system located directly above the drillhole inside the derrick.

The positioning system of the JR operates fully automatic, just press the button.

And of course it uses the holy grail of any application in modern navigation: GPS, the global positioning system. Therefore the ship has two receivers that make up to an accurancy of about 4 meters.

To increase accurancy especially in bad weather conditions or weak satellite
reception, a second system is used in parallel. This system operates with a sound source that is lowered to the ocean floor. The sound produced by that device is being recepted by several microphones inserted in the ship’s bottom and processed by a computer to determine the ship’s position in relation to the beeper on the seafloor. The computer then regulates the thrusters, achieving an accurancy of 3 meters.

The lowering of the sound source is quite easy compared to the high tech that comes with it:

it’s simply thrown over board:

As the device is very expensive it’s not left on the seafloor. Before leaving a drill site, a signal is sent down the water that makes it let lose an iron weight and hovering up to the surface where it can be collected.

Inside the ship you don’t notice very much from all that technology except for the thrusters kicking in every now and then, producing a sound very much like the excavators on the construction site round the corner at home. That’s why ear plugs are an essential item to sleep well.

Legend has it that in the past the super accurate positioning of the ship led to some distraction as the ship was found surrounded by empty bottles after being in place for a certain time – sneakly thrown over board during nightly feasts on deck.

Nowadays that doesn’t happen any more: the use of alcohol is strictly forbidden on the ship.