Doing Science on the JR
Change of Plans again, or Whoops We Broke Something! 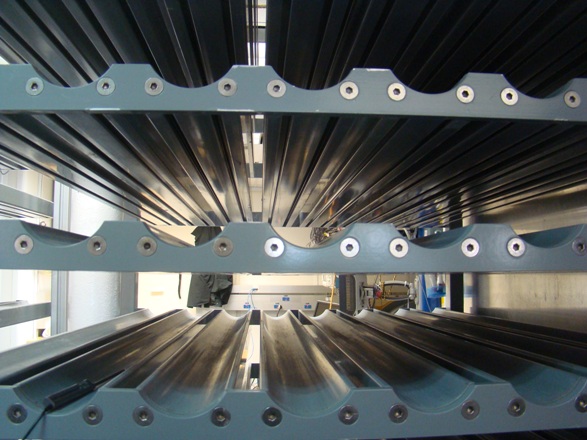 Well – we got core. (note the lack of exclamation point). We arrived on site a few days ago. First we began drilling with APC drilling (Advanced Piston Coring). ACP coring is for softer sediments and is usually used at the beginning of the hole.  When the sea floor gets too firm for the APC to work well, we switch to XCB (extended core barrel), which is best for firm sediments.  Once we run out of sediments and hit hard rock, then we use the RCB (Rotary Core Barrel). I have pictures of both ACP and RCB drill bits below. You can see that the APC is smooth (guy has his hand on it in picture). It just slides through soft sediment. The RCB has teeth that turn. You can see how this is able to dig through harder rocks. The XCB is in the picture to the right to the ACP – You can see how it falls in between the other two drill bits. It has small teeth, but not as big as the XCB.

Unfortunately APC did not work for us. We tried twice, once the piston just bounced off the sea floor and we retrieved nothing but water, and the second time we actually bend the core barrel on the bottom of the sea floor. We were tired of not recovering anything so we switched right to RCB (HAHAHA…MORE POWER!). Finally yesterday we got something! To our surprise we got gravel – For my geology friends – let me describe: We had angular, unsorted, quartz and feldspars. Grain sizes were layered from gavel to coarse, then gravel to coarse again….TURBIDITES! (man….looks like stratigraphy will come in handy). For those who don’t know, turbidites are like underwater avalanches that are responsible for moving and distributing vast amounts of sediment. The bigger grains settle out of the ‘avalanche’ first because they are heavier, and then as the avalanche looses energy, the smaller grains fall out. Multiple turbidies will give a layered look. Anyway – all you need to know is we hit gravel which is really hard for the APC to go through which is why they didn’t work. While the turbidies are interesting, it is hard to keep the gravel from falling into the hole – and there is the danger of losing our drilling equipment in the hole. SOOOOOOO…..we are pulling everything up and moving to a new location. So, that’s another day of travel, another day of set up, …….we are definitely not getting anywhere fast. But as or co-chief Carlota said – “this is what happens when you drill where no drill has gone before”.
Alright a few more fun facts for you. The JOIDES Resolution is 470.5 feet long. The Derrick (drilling tower) is 147 ft tall. It has 46500 feet of drill pipe on board. Our optimal speed is 10.5 knots. Oh I also wanted to tell you about the beacon. One of Ms. Nicholson’s students asked me about it before I left. Before we drill, we toss a beacon over the side. This floats to the bottom of the sea floor and send out sonar waves back to the surface. The boat used these waves to stay in one location. The boat also used GPS satellites to help stay still. We use a combination of both, because we wouldn’t not want the boat to drift with the current, and then bend the drilling pipe. My last two pictures show the beacon as it is being tossed overboard, and then a picture of where the two APC cores were attempted and XRB holes was drilled (two separate locations). The yellow is where the center of the boat had been. See that it hasn’t changed that much over time. The pipe can bend a little – so a little movement is okay.

So we move on, with our core rack still empty…(minus some gravel)