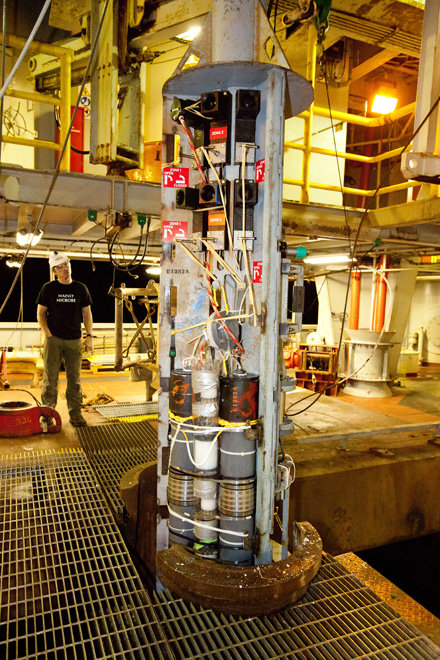 After more than a week of preparing and coring and logging and assembling, the Hole U1382A CORK has been successfully installed! The whole ship breathed a collective sigh of relief, and we now move on to site U1383. Here’s a look back at the process:

At midnight on Monday, the final connections were made connecting the CORK head to the rest of the casing. After head was attached, the rest of the night was spent assembling the OsmoSampler string and lowering it down through the middle of the CORK, checking and modifying the top plug so that it would latch, dunking the CORK head to fill the umbilical lines, and adding an experimental osmotic pump package to the head. They did a visual check to make sure the top plug of the OS string is properly seated and is latched in (they’ve modified the latching mechanism since the last CORK). Then, we started lowering the CORK to the seafloor. It took a little longer than normal—we filled each stand of drill pipe with water to minimize the pressure differential on the top plug as we lowered it down. When the CORK was near the bottom, we lowered the camera system in order to see the re-entry cone.  We re-entered Hole U1382A in the early afternoon on Tuesday. Scientists and crew gathered around to see it on our shipboard TV system; as usual, it’s a very amazing process to watch!

About two hours later, we landed the CORK. Then, crews spent the evening inflating the packers (which seal off different sections of the borehole for sampling) and assembling the ROV platform, which was then lowered using a deployment tool on the camera frame. The ROV platform was successfully installed at about 4AM, and we were able to release the CORK running tool early this morning!

So now, we’re moving on. The CORK running tool is being recovered and should be back on board by lunch. Then we’ll signal the seafloor beacon to release and it will take quite a long time to float up to the surface. Once we pick it up, we’ll attach an 18.5-inch tricone bit to some drill collars and then start lowering it to the seafloor. While we’re lowering it, we’ll be slowly moving over to our new location, NP-2. By the time we’re ready to start the jet-in test and depth check, we’ll already be over the new site—Site U1383. This hole is going to be deeper, so it will take a lot more time that U1382A did. Still, it’s the same general process: drill, core, log, CORK! We are all looking forward to another successful installation.

All photos by William Crawford (IODP/TAMU)