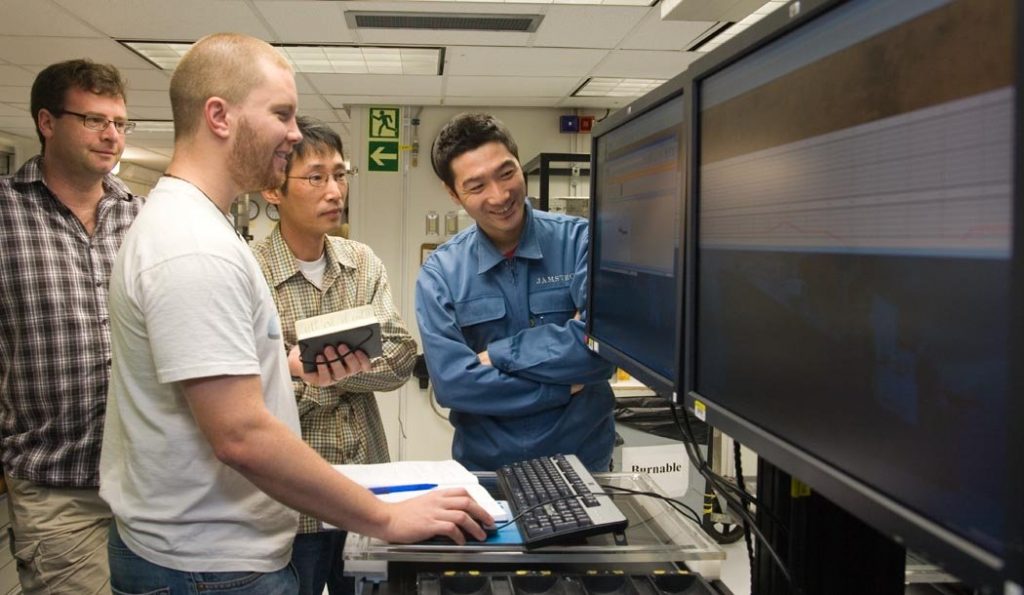 Underway: We have been traveling southeast for a little over two days at speeds between 10-12 knots. We still have a little over 390 nautical miles to go, so there will be a few more days of quiet before the first core makes it on deck. Then we will all be very busy. In the meanwhile, the scientific and technical folks are making sure all of the core scanners, scales, pycnometers, microscopes, and other equipment are properly calibrated and in working order. We are getting a tutorial on “core flow” today, meaning we learn what happens to the core as it makes its way from the drilling derrick, to the core deck, and into the labs. This is sort of critical because there are ephemeral samples that need to be taken right away and there are multiple lab groups that need to sample at the same depth for direct comparison of, for example, geochemistry of pore waters and grain density (yay grain density, that’s my job!).

Working: Everyone (well, almost everyone) has migrated to their respective shift schedule. The ship seems less crowded now as only half the people are awake/active in a 12 hour period. The folks in the core lab (your humble narrator included) were getting a little loopy last night as we waited for the shift to end (“Can it really only be 8pm?”). But as I said, we’ll be super busy real soon. I went out on the upper deck last night and was greeted by a pair of boobies (long range sea birds) that were taking a rest on the running lights. Ships like the one we are on are the only place these birds have to rest. Looking out over ocean and thinking about how far these birds had come, the closest shore thousands of miles away, made the ship seem very small. I had a fleeting feeling of claustrophobia at the thought of not being able to leave the confines of the ship for two months, but the feeling passed.

Not working: I’ve been using the gym, mainly the stationary bike. I use the term stationary rather loosely here. Pedal, pitch and roll with ship. The food has been great. Everyone has started to look forward to the cookie breaks that happen 3 hours after mealtimes (around the clock). Otherwise when we are not working there is personal work (I’ve been doing some), a movie lounge and many hundreds of DVD’s, and your empty cabin to retire to (as long as your cabin mate is on the opposite shift, which most are). I realized that I was one of the only scientists on board without a facebook profile, so I joined up yesterday. I guess Facebook and Gmail interface because I got a list of about 4 dozen people that I could ‘friend’. So, I have been hearing from people from my distant past. It is a nice juxtaposition, the isolation and (sometimes) loneliness of being out at sea, while reconnecting with long lost friends and acquaintances.

That’s it for now,