The ‘hole’ story about vesicular basalt 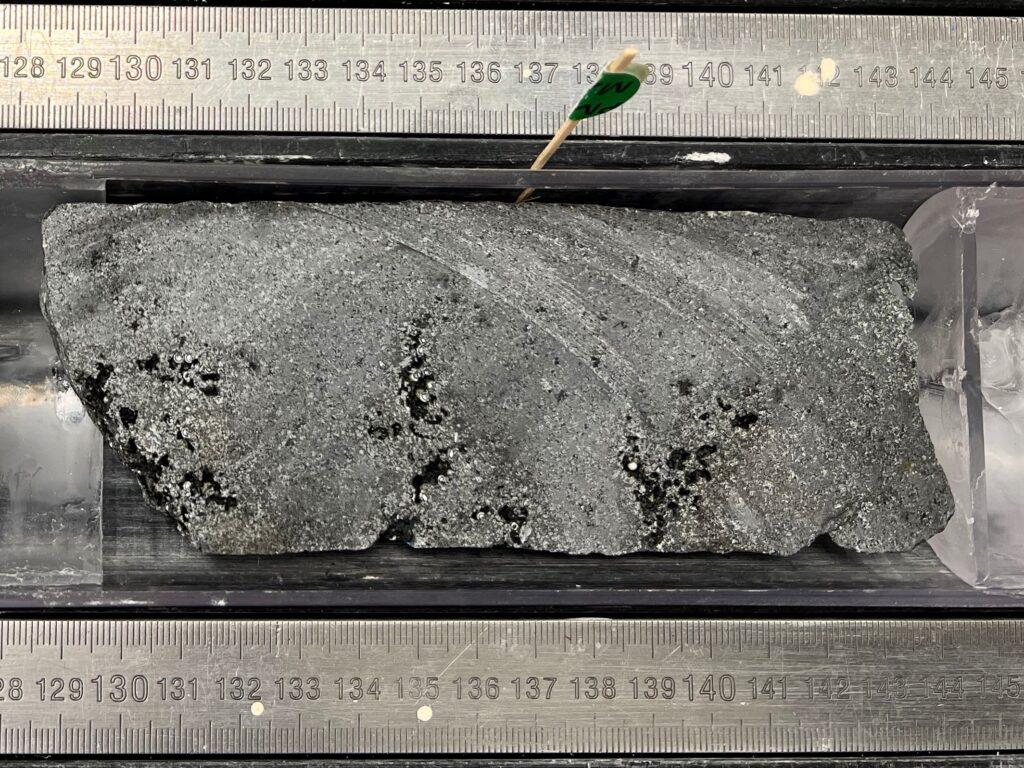 Whether you know it or not, your life is full of igneous rocks. Maybe it was an obsidian arrowhead in a museum (or if you were really lucky, in your backyard). Maybe it was the basalt used as a construction material on a building, outdoor staircase, or alongside a river. Maybe it was the pumice you bought at the pharmacy to buff the dead skin off your feet in the shower. If you really think about it, igneous rocks are everywhere.

Want to know where there are REALLY a lot of igneous rocks? Underneath the ocean. Oceanic crust forms at mid-ocean ridges, where plate tectonics are in the act of tearing Earth’s surface apart. As tectonic plates rift away from each other, material from the mantle, made molten by the sudden reduction in pressure, bubbles up to fill the void and crystallizes to form new crust. Over time these rocks get covered in marine sediments, composed of the finest mud and hundreds of meters of nannofossil ooze, forming the ocean floor as we know it today.

Extinct volcanoes like those of the Walvis Ridge are also made of igneous rocks. The sister expeditions EXP391 and EXP397T sailed over a thousand kilometers from Cape Town to drill hundreds of meters below the ocean floor to attempt to retrieve these igneous rocks. The basaltic lavas that flowed out of these volcanoes 60 to 130 million years ago hold the clues that will help us understand why the Walvis Ridge is just so weird.

For the majority of Earth’s history, misconceptions about the nature of our Earth have abounded. If we drill into the side of a volcano, will that release all the magma stored inside and lead to a massive volcanic eruption? If we drill into the Earth, will the whole planet deflate, or even pop like a balloon?

More negligible than a mosquito’s proboscis on the flank of an elephant, the drill of the JOIDES Resolution is about 25 centimeters wide, drilling into volcanoes that are 25 kilometers across. The volcanoes we are drilling into are far from active. In some cases, they have been extinct for over 100 million years.

The cores that we recover from the slopes of these dead volcanoes are a mere 6 cm across. How is it possible that we can learn anything from a tube of rock that narrow? It’s amazing what stories we can tell when that tube is 100 m long.

You can think of a core as a time machine, with a little less drama than the industry-standard blinking lights and spooky humming. The principles of stratigraphy tell us that (in an area that has not been deformed by folding), as we go deeper, the rocks we encounter get older. The ooze that is characteristic of the first several cores is the youngest material we collect, the more lithified sediments that get pulled up next, from deeper in the hole, are older, and finally the basaltic basement rock that we eventually reach is the oldest. The higher the core number, the longer ago we are looking into Earth’s past.

Anatomy of a volcano

What makes a volcano a volcano is the magma chamber inside. This is essentially a pool of molten rock that has risen towards the surface of Earth due to its high temperatures. Hot materials tend to be less dense, and therefore more buoyant. The characteristics of the magma are dependent on many factors, and can vary widely. Some magmas are rich in elements like iron and magnesium, while others tend to have more silicon and aluminum. Some magmas are viscous while others are liquidy-smooth. Some are pure molten rock, while others contain dissolved gases such as water vapor, carbon dioxide, and sulfur dioxide.

These gassy magmas are the ones we will focus on for the rest of this post. The next time you’re near an unopened bottle of soda, take a moment to make some observations. Can you see any bubbles? If so, are there a lot, or very few?

The reason you can’t see a lot of bubbles is that the contents of that bottle are under some serious pressure. You can verify this by giving the bottle a squeeze. It feels so hard because of the high pressure inside. It is this high pressure that allows the carbon dioxide to dissolve into the liquid of the soda, essentially disappearing. In other words, as long as that bottle remains unopened, the liquid and gas are perfectly blended into a homogeneous mmixture, forced together under pressure.

But what happens the moment you open the bottle? At the sudden release of pressure, the carbon dioxide is no longer forced to mix with the liquid, and instead makes its way out in the form of thousands of little bubbles. If you disturbed the bottle prior to opening it, the small act of relieving pressure may even result in an explosion.

Let’s return from this analogy to back to volcanoes. As long as the magma stays inside the volcano, the pressure of being underground keeps those gases dissolved. But as soon as the volcano begins to erupt, the dissolved gases are free to expand and make their way out of the melt.

In the case of the Walvis Ridge volcanoes, the rock that results from this process is what’s known as a vesicular basalt. “Vesicular” refers to the gas bubbles, or vesicles, that were trapped and frozen in place as the rock crystallized, and “basalt” means that the lava was rich in iron and magnesium, indicating an oceanic crust or mantle source.

Just like in a glass of soda, as the lava hardens and crystallizes into solid rocks, the gas bubbles try to make their way up and out. We can actually see evidence of this in basalt cores collected during Expedition 391. In the picture to the right, you can see a fragment of what is called a pillow basalt, similar to the image above from the mid-ocean ridge. The black edge towards the top of the picture is the outer shell of the lava pillow, and you can see several vesicles (some filled in with a green secondary mineral) in the process of making their way to the top of the rock.

Just like with soda, this process makes sense. Gas bubbles are much less dense than liquid (whether it is liquid cola or liquid rock) so they float to the surface.

So then what does it mean if we find vesicles in the middle of a core? During Expedition 397T, we recovered tens of meters of basalt. Unlike the rocks we recovered during Expedition 391, there is very little change in the basalt throughout all the cores, indicating a massive lava flow. But instead of finding vesicles near the boundaries between flows, we are observing them right in the middle of a crystallized basalt.

How did those bubbles get there?

Expedition 397T scientists have been doing the detective work, observing and describing the cores centimeter by centimeter to try to figure it out. By comparing their analyses of these cores to known volcanic processes they are now able to tell the ‘hole’ story.

The case of the core-bound bubble can be explained by what’s known as “lava inflation events” that occurred over time. As evidenced by the recent volcanic eruptions in Iceland, volcanic eruptions can continue over a period of several months. Though this is minimal in terms of geologic time, it is significant enough to lead to visible patterns in the rocks that form from it.

When a volcano initially erupts, it deposits a flow of lava along its flanks. If left uninterrupted, this lava will eventually cool and turn into rock. If there was gas dissolved in the melt, vesicles should be found near the surface of the rock, trapped on their way to the atmosphere.

This process is referred to as lava inflation because over time the new lava “inflates” the preexisting igneous rock. Igneous petrologist Dr. Wendy Nelson likens it to inflating a bike tire with air, or a donut with filling.

In the case of EXP397T basalts, the lava inflation event must have occurred soon enough after the original eruption that the lava was still warm, but solid enough that gas bubbles got trapped between layers and were unable to rise all the way to the surface. We know that the lava was still warm because we don’t see any quench boundaries or chill margins, which are textures that occur when hot lava interacts with a cold surrounding environment. However, the lava must have been solidified just enough, while still warm, that it created a boundary solid enough to prevent gas bubbles to continue their upward journey.

When people from outside the scientific drilling community look at a core, they see a pile of tubular rocks. But when our scientists look at cores what they see is a story over time. Each centimeter of core is one more page in the book of Earth’s history.