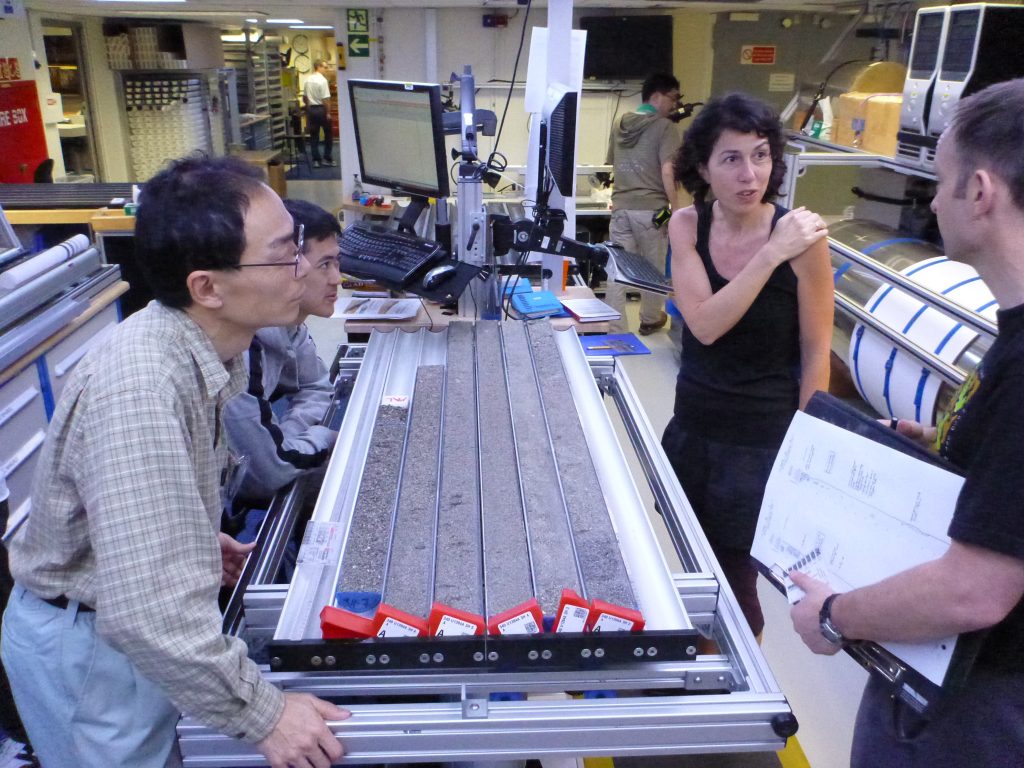 When a core has been recovered and processed by a curator and core technicians, the next steps are imaging and visual description of the split core (archived half). All distinguishing features must be recorded from the archived core half by observing and sketching what is visible. This is important because core description will be used 1) by scientists on the ship and at research institutions from around the world as a basis for sampling the core for further geologic study, and 2) for forming the first general conclusions about the environmental conditions and geologic history of that location on the seafloor. During expedition 340 there are many core describers aboard to complete this important and detailed data gathering. Follow along to learn more about visual core description (VCD). Teaser photo credit, Daisuke Endo.

Ahoy Teachers! Be sure to scroll to bottom of page for suggested TEACHING RESOURCES.

Sedimentologists and volcanologists are the 340 Ocean Detectives responsible for describing the geology of cores by providing the first complete description of the cores. Observation and classification are key aspects of what they do. They describe the physical characteristics such as grain size, texture, mineral content and color of the rocks and sediments.  From these observations they produce a visual core description (VCD) that begins as a sketch then scanned to a computer. They also determine what type of sediment(s) is in the core by observing individual sediment grains under a really, really nice light microscope from a smear slide. These two pieces of information help to describe differences observed within the core, especially changes within units or boundaries (layers).  These units are defined by changes in rock type (lithology), physical properties, redox-related color changes and gravity flow deposits.

Sedimentologists and volcanologists have considerable responsibility to the scientific community at large, for they are often the only scientists who have observed all the cores from each of the sampling sites drilled during the expedition.

Daisuke Endo (photo, Takeshi Saito)                Osamu Ishizuka, Peter Talling, Molly McCanta, Sandra Hermann, Yoshihiko Tamura (photo, Daisuke Endo)
Other data collected from the archived core half is a high resolution photograph of the core and a measure of how light is reflected from the cored material using a spectrophotometer.

All this data is combined to describe the rock type and what environmental conditions were like when the rock was formed as well as what has happened to the rock through time.

What is a Core?  – Grades 9-12. Ocean drilling samples are recovered in cores, long tubes of material collected while drilling beneath the sea floor. Specific terminology is used to precisely describe the location of a sample taken in a core.

Core Section Curation – Grades 9-12/Undergraduate. Students will be able to use their prior knowledge, plus the guides and materials provided, to catalogue and label one or more core samples.

Visual Core Description – Grades 9-12/Undergraduate. Students will be able to use their prior knowledge, classroom resources, and the visual identification key and record sheets used by scientists aboard the JOIDES Resolution to identify and describe distinguishable characteristics in one or more core sections.

Core Understanding – Core Description and Lithostratigraphy – Grades 9-12/Undergraduate. You will model the role of a shipboard sedimentologist and describe a split core. This is an inquiry-based activity and it will draw on and further develop your scientific skills of observation and description. You will also learn how important it is in science to be complete and consistent in recording your visual observations.

Inquiry into Sediment Cores – Grades 9-12/Undergraduate. This activity serves as an inquiry-based introduction to description of sediment cores and to primary types of marine sediments, their distribution on the sea floor, and the controls that determine their distribution.