We’ve Been Adopted (by Melba-Melvin) 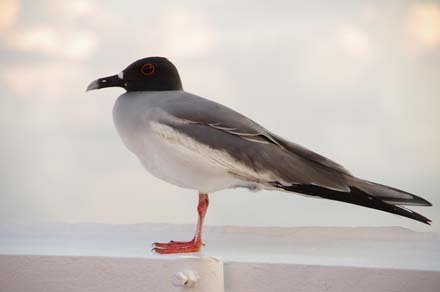 For days now (maybe closer to a week), come rain or shine, we’ve had a Swallow-tailed gull hanging around for hours at a time on the two liferafts that are secured along the port-side of the Forecastle, or "Fo’c’sle," Deck.  The bird spends so much time out there, we’ve begun to think we may have been adopted…

Word has it that even the guys from the drilling crew (usually the toughest-of-the-tough), have taken to saying "good day" to the bird when they pass by at the beginning of their shifts. Looks like we’ve all developed a bit of a soft spot for this gull.

Our resident ‘birder,’ Sandy Dillard, says there’s no way to tell just from the bird’s markings whether it’s male or female.  Chad Broyles, our Curatorial Specialist, says we should call the bird "Melba" if it’s a girl, and "Melvin" if it’s a boy.  Which do you think it is?…

Tim Fulton, our good-natured Publication Specialist, sits in an office that looks right out on those liferafts, so you can see the bird really well from where he sits. And people are forever piling into Tim’s office at all hours of the day, saying things like, "Look!  The bird’s back!" (And Tim just smiles, because he knows the bird’s been there for 3 hours already).  Tim thinks the bird is a girl and refers to it as "she," so maybe we should follow Tim’s lead, and just decide to call her Melba.