What do Hawaii, Yellowstone National Park and the Louisville Seamount Trail all have in common?

Intro to seafloor drilling
What’s so cool about Louisville? 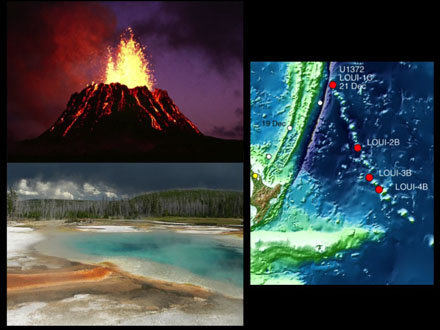 So your first guess may be “tourist destination.” That is 2/3 correct, the exception being tourists rarely visit the Louisville Seamount Trail (at least, not without a drill ship). The answer that is 3/3 correct is that all three of these places were created by hotspots.

As I mentioned in my last blog post, this kind of hotspot has nothing to do with free wireless internet; instead they are places where magma rises to the surface of the earth for thousands or millions of years in pretty much the same place. The rising magma usually produces a chain of volcanoes on the Earth’s surface.

A hotspot that stays in the same place and produces a chain of volcanoes probably sounds like a magic trick, but there is a scientific explanation. The hotspot magma rises from the Earth’s mantle, kind of like wax rising in a lava lamp (if anyone in your house was alive during the 1960’s, then you probably have a lava lamp in the attic that you can plug in and see what that looks like). The hotspot stays in about the same place in the mantle. It is the lithosphere (the crust and uppermost portion of the mantle) over the hotspot that is moving. As the lithosphere moves over the hot spot, the rising magma occasionally breaks through the surface to form a new volcano. This can happen for millions of years, so one hotspot can produce a chain of volcanoes thousands of kilometers long.

If you go to Google Earth (see the Educator Ideas blog for tips on using Google Earth) and check out the Hawaiian Islands and the Louisville Seamount Trail, you can easily see the chain of volcanoes caused by their respective hotspots. If you look closely at the northwestern United States, you can also see the path of the Yellowstone hotspot. Yellowstone has a particularly explosive hotspot that has been much more destructive than constructive. In its wake, instead of a chain of volcanoes, you will see the wide valley that extends from the southeastern corner of Oregon through southern Idaho to the hotspot’s current location under Yellowstone National Park.

So now the question is: what is making the crust move above the hotspots? Find out in my next post. Same blog time, same blog channel.

(Photo of Hawaiian volcano comes from the U.S. Geological Survey).