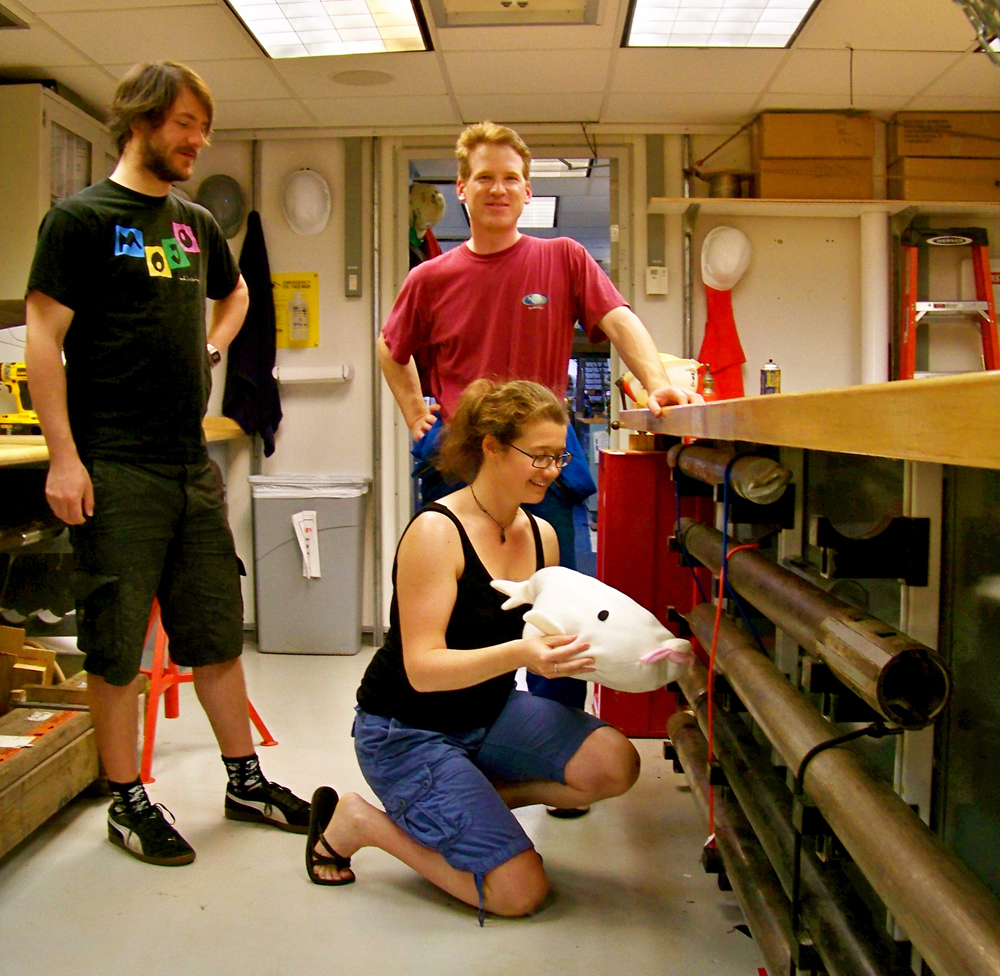 Louise and Sebastian (and Kerry!) are loggers, but not the kind that carry chainsaws and eat lots of pancakes. They are logging scientists. They have an important job on the JOIDES Resolution. They send scientific instruments down the holes the JR drilled in the seamounts and the instruments then fill in the holes in the scientists’ data.

When the JR is drilling rock, not all of the rock always makes it into the core. If the drill bit suddenly runs into a layer of rock that is either harder or softer than the rock above it, it can sometimes break the rock into tiny pieces that are thrown to the side (kind of like when you make a smoothie in a blender without a lid on it and fruit remnants are splattered across your kitchen (don’t actually try that)). The drillers are so smart they can quickly adjust the drill bit so it stops doing that, but still there will be places in the core where missing rock should be.

It is hard to tell how big the gaps in the core really are, because when the cores are brought up, all the rock segments in it get pushed together. That’s when the loggers come in to save the day like scientific superheroes. They send long, thin scientific instruments (like the ones by me in the photo above) down the hole that measure some of the same physical properties that Patrick the Physical Properties Specialist measures (remember I wrote about him in this blog). The logging data on the hole can be compared to Patrick’s data on the cores, and the cores and the hole can be the be matched up.

Even cooler, Louise can using the logging instruments to take pictures of the holes. She doesn’t use a camera, though. The logging instruments can either send out electricity, sound waves or seismic waves into the rock around the hole. Since the rock is not the same all the way through, some of the waves are bounced back (like an echo when you sing in the shower) and some are not (like the lack of echo from all those times you sing in a room completely covered floor to ceiling by carpet). The waves that come back to the logging instrument make a picture that shows all the fractures and areas of different material in the cores. These can be compared to the fractures and areas of different materials in the core, to find the cores’ exact depth and also where and how big the gaps from the missing rock are.

Here you can see Sebastian and Kerry in action last week helping to put a logging tool down the drill pipe. Because logging can only happen when drilling is done, loggers have to work long hours for a few days. So last week, Louise and Sebastian worked 36 hours straight, took a nap and then worked for 40 more hours straight.

When Louise and Sebastian were kids, neither of them told their parents, “When I grow up, I want to be a logging scientist!” Louise grew up on a farm in England. She always liked the outdoors, and as she grew older she became interested in geology. Sebastian grew up in Germany, and liked science, but did not become interested in geology until he went to university. He started in physics, but realized that he preferred geology because it allowed him to be outside more. Louise and Sebastian are both fairly new scientists. Sebastian is working on a Ph.D. and Louise is working on a post-doc. When not logging, Louise likes traveling and eating Sushi. Sebastian plays the guitar and may be the only person on Earth who can write both “logging scientist” and “juggling instructor” on his resume.

So if you like math, computers, geology and sleep deprivation, then you can tell your parents, “When I grow up, I want to be a logging scientist!”