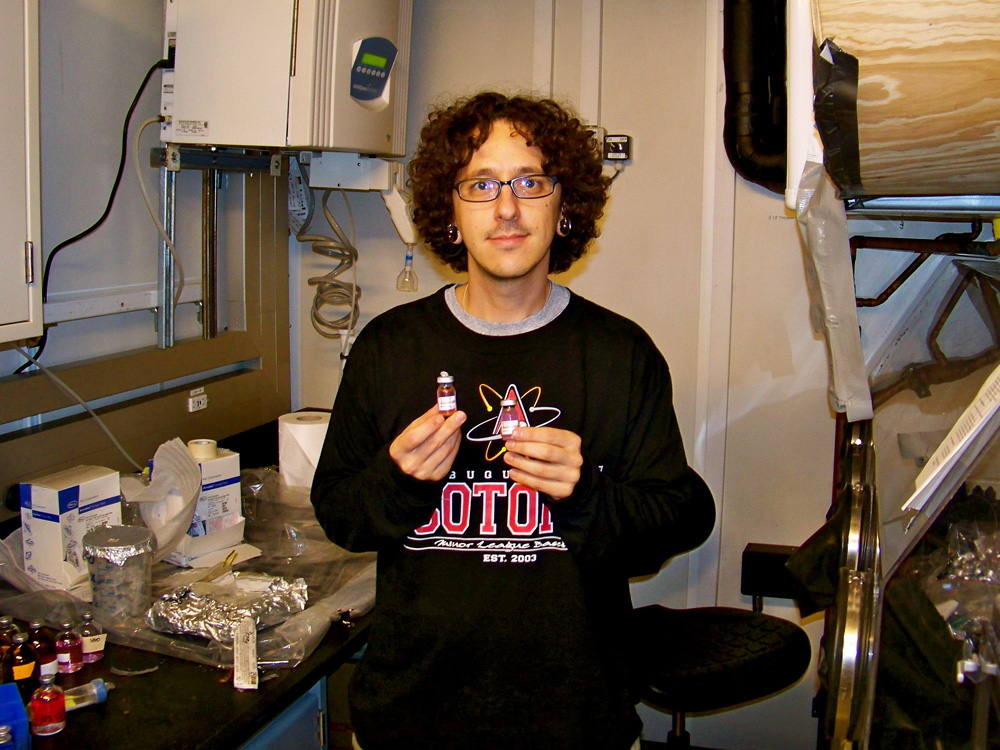 Jason Sylvan is a microbiologist on an expedition about deep-sea volcanoes. As our last expedition was all about microbiology, you might be thinking that Jason is here because he was on that earlier expedition, forgot to get off the JOIDES Resolution in Auckland and, since he was stuck with us, we figured, “Might as well put him to work.” Jason has been part of the plan for this expedition all along, though. To find out what he is doing and why microbiology rules, read on!

Microbiologists study microbes, which is why they are not called giganticbiologists. Microbes are living things that can only be seen with a microscope. We usually think of microbes as being germs, but only a teeny, tiny percentage of microbes make people sick. Most of them are completely harmless to people and some we could not live without!

Microbes may be tiny, but there sure are a lot of them. If you weighed every living thing on earth, much more than half of the weight would be made up of microbes. As scientists learn more and more about microbes, they have realized that microbes inhabit places that we would normally not expect living things to be, like inside rocks in Antarctica, in incredibly hot springs in Yellowstone National Park and on your elbow. There are so many different kinds of microbes that scientists are pretty sure there are way more of them than they have discovered yet. Here are some pictures of a few different microbes found around the world to give you an idea of the variety. One is not a microbe, though. See if you can guess which one.

Hopefully you figured out that the guy in the middle is not a microbe. He is, Jason our microbiologist. Jason is on our expedition because the inside of seamounts may be a habitat for microbes. The seamounts we have been drilling are all extinct volcanoes. Volcanic rocks tend to have a lot of holes in them, like a sponge, and like a sponge, they soak up water. Anything containing water can be a habitat for microbes. Jason is one of the first scientists ever to see what might be living inside these mountains deep in the ocean.

When a core comes up, Jason selects a small sample of rock to take to his lab to look for microbes. Jason does a lot of cool things to find out what kinds of microbes may be living in these rocks. Here he is blasting the rock with a blowtorch to make sure no non-seamount microbes snuck on the rock after it came out of the seamount and contaminated his sample.

One thing Jason has been doing is trying to grow more microbes from the ones he finds in his samples. He crushes the rock to get to the microbes inside of it, carefully places the microbes and rock bits back in seawater and takes them into a special container, the Anaerobic Hard Shell Chamber. Here is a picture of me inside of it.

The seamount microbes go in here because, most likely, they find oxygen to be poisonous, and the Anaerobic Hard Shell Chamber is oxygen-free (so I’m holding my breath in that picture). Jason sticks his hands in gloves attached to the chamber. He then is able to put the bits of microbe-inhabited rocks into sample jars without poisoning the microbes to death in the process. You can see Jason holding some of his sample jars in the photo on top.

The Anaerobic Hard Shell Chamber is in the Cold Room, which is why I am wearing my Steve Zissou hat in the photo. The seamounts we are drilling are deep in the ocean where the water is just above freezing, so the microbes that live there are adapted to cold temperatures. The Cold Room is always 4 degrees Celsius (i.e. really cold!) to provide the right environment for them to live and grow in their sample jars. Jason will not be able to see what microbes may be in the jars until he returns to his lab on land. The sample jars are growing cloudier, though, so Jason is pretty sure microbes are growing inside of them.

Jason has always wanted to be a scientist ever since he can remember. At different times he wanted to be a paleontologist and an astronomer, but when he was still a kid, he received a book by Jacques Cousteau about the oceans and he became interested in marine biology. He received a degree in biology in college and then in grad school took a class on microbiology that made him really interested in all the amazing things that microbes can do. He received his Ph.D. in microbiology and today works in a lab at the University of Southern California in Los Angeles. When he’s not studying microbes and their ocean floor habitats, Jason likes photography and also plays guitar in a punk rock band.

So if you would like to be out at sea sometimes and working inside other times, using a variety of cool lab equipment and learning about microscopic creatures, maybe you can be an ocean floor microbiologist too!

PS. To find out more about what Jason does as a microbiologist, read his own blog here on the JR website.