It's Cold in the Cold Room!
Make a Seamount Trail in the Classroom 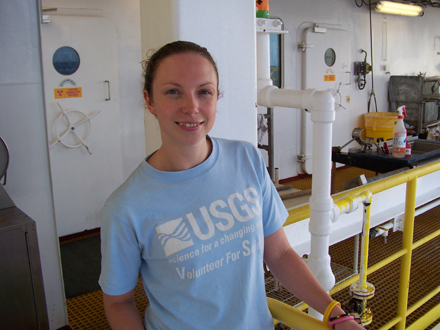 Meet Nicola Pressling, one of the scientists on board, and find out why paleomagnetists have the coolest job you probably never heard of before.

The Earth acts like a giant magnet and paleomagnetists are interested in that. If you have ever held a compass, then you know that it always points towards the north. Well, at least now it does. If you were able to travel back in time thousands or millions of years, then your compass might just as likely be pointing south as pointing north. Every few thousand or million years or so, the earth likes to reverse the position of its magnetic pole. Sometimes the magnetic pull is near the North Pole and sometimes it switches to the South Pole. So far, scientists do not know why or how this happens.

What scientists do know is there are particles in lava that are attracted to the magnetic pole. When the lava cools to form rock, those particles are still pointing towards wherever the pole is at that time. They stay that way even after the magnetic pole switches. Paleomagnetists like Nicola can look at which direction the magnetic particles in volcanic rock are pointing (using a machine called a magnetometer, which I am sitting on in the photo). From that, they can figure out when and where the eruption of lava occurred that created the rock.

When Nicola was a kid growing up in the United Kingdom, she was not thinking that ancient lava flows and the Earth’s magnetic pull would be the focus of her future job. She was dreaming about being a dancer or joining a theater group. She liked the outdoors, though, and was really good at physics and math in school. When a career aptitude test suggested she become a geophysicist, she became interested. She received a Bachelor’s degree in geophysics in college and then a Ph.D. in paleomagnetism. She is a paleomagnetist now, but still has time to be a dancer and to be involved in the theater. She is excited to be on the JOIDES Resolution, because it is her first time at sea collecting the samples of rock that she will also analyze in her lab.

So if you like math, spending time both indoors and outdoors, learning about the earth’s history and using creativity to solve problems, then you might want to be a paleomagnetist just like Nicola.

PS. If you want to see where Nicola grew up, check out the “Where are the Scientists From?” map found on the Expedition 330 page.