How fast do these microbes grow?
The Decline and Fall of a Volcanic Island 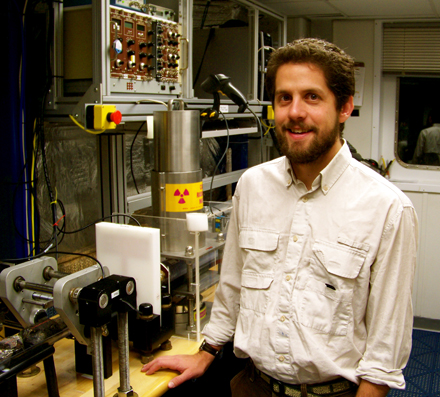 All the scientists on the JR are here to describe the rocks and sediments we are drilling. While most of the geologists are describing the cores by using their eyeballs and their brains (and maybe a hand lens and a microscope), Physical Properties Specialist Patrick Fulton is able to describe them by using instruments with cool names like Pycnometer and Whole-Round Multisensor Logger.

On the cores, Patrick measures physical properties such as porosity (how much empty space is inside the rock that can hold water) and color (I am going to assume you already know what that is), as well as many others.

That’s me checking out the scanner Patrick uses to measure the colors in the core.

Patrick is particularly interested in the porosity of the rocks because he is a hydrologist. Hydrologists study where water goes and what happens to it as it travels around the world. Patrick mainly researches the water in the ocean floor, which can do amazing things, like help cause earthquakes.

As a hydrologist, Patrick was interested in being a scientist on this expedition because seamounts are like the ocean floor’s faucets and drains. Most of the ocean floor is covered by sand and clay, which is so tightly packed, that it is like a raincoat keeping water from passing into the ocean floor. Seamounts, on the other hand, do not have a lot of sand and clay on them and they are made of volcanic rock with lots of holes in it, so most of the water that travels between the ocean and the ocean floor goes through seamounts.

Patrick has been interested in geology since at least second grade when he entered a project on rocks and minerals in his school science fair in Georgia (U.S.). He became interested in physics in high school and started college as a physics major. After, a couple years though, he realized that physicists are not able to go outside much, so he started thinking that studying something related to geology might be a better fit for him. After he switched majors, a professor inspired him to focus on hydrology, which allows Patrick to use math, like a physicist, but also do fieldwork outdoors, like a geologist. Patrick received his Ph.D. and now does research on how water affects tectonic forces like earthquakes.

So if you like physics, math and geology, and like to work both outdoors and on a computer, then being a hydrologist who studies water in the ocean floor might be the right job for you too.

PS. If using water to cause an earthquake sounds familiar, it is because Christopher Walken tried to do that to California in the James Bond movie A View to Kill. Patrick told me that.