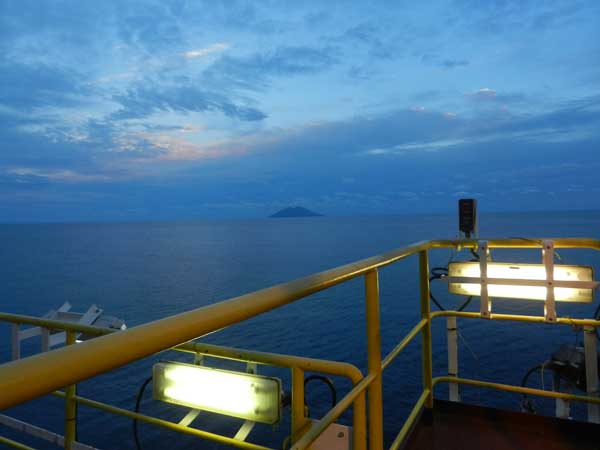 Time flies when you are having fun. Since my last entry we’ve completed the drilling and shipboard analysis of all three holes at our first site, U1422, and are now about midway through the second site, U1423. This site is located in shallower water, about 1785 meters deep, and is within distant sight of the island of Hokkaido and, even closer (~16 nautical miles), to a smaller uninhabited island whose characteristic profile denotes its volcanic origin. Probably no surprise that the sediments we’ve looked at are full of volcanic ash layers that record a history of regional volcanism.

I’ve looked at deep sea sediments for nearly 30 years (ouch, that sounds like an eternity) and have rarely seen cores come up with such spectacular mud. The accompanying photo from our first site really doesn’t do justice to the sequence but it gives some idea of the light and dark layering and the abruptness of the color changes. The darker layers themselves are often finely laminated; by that I mean you can see very thin, distinct layering within them. That is typically a surefire sign that the sediment of the dark layer accumulated on the sea floor under anoxic conditions, meaning that the overlying waters contained no oxygen. When bottom waters in the ocean contain oxygen, burrowing worms and other bottom-dwelling organisms typically stir up the sediment as they look for food. This is a process known as bioturbation. The absence of oxygen, however, means that organisms can’t inhabit the sea floor and hence fine layering and other delicate sedimentary structures are preserved. That’s what we’re looking at here in these sediments – alternating periods of time where the deep Japan/East Sea was oxygen-rich and oxygen-depleted.

Our shipboard paleontologists looking at the microfossils that are sieved or collected from the mud can rapidly give us preliminary age information. Based on their “datums” we know that the sediment at Site U1422 accumulated at an average rate of about 5 cm per thousand years (which is equivalent to 50 meters per million years). Given that rate, the implication is that these light and dark layers alternate on a time scale ranging from perhaps hundreds to a few thousand years.

What could cause that kind of variability of oxygen levels in the deep Japan/East Sea? Well, we don’t fully know yet but one major hypothesis we’re exploring is that these changes are related to climate events known as Dansgaard-Oeshger (D-O) events. D-O events were first discovered in ice cores drilled from the Greenland ice cap about twenty or so years ago and represent very rapid temperature excursions that occurred during the last glacial period; during D-O events air temperatures over Greenland rose and fell by as much as 10-12 degrees Celsius over periods as short as one to several decades. Since their recognition in the isotopes of Greenland ice, climate changes correlative to D-O events have been identified in many regions of the world, including in some remarkable speleothem (cave deposit) records from China that reflect monsoon activity.

The time scale of D-O events is also very comparable to the apparent pacing of the light-dark cycles in our sediments, which makes them doubly interesting. Although climate changes that occur over time scales of thousands of years would at one level seem to be hard to get excited about, it’s the rapidity of the transitions from one climate state to the other that has clear societal implications because it suggests that climate can change rather dramatically and abruptly in a few decades or less. Understanding how this works requires an understanding of how all the parts of Earth’s complex climate system are coupled together. Our work in the Sea of Japan/East Sea is really just a piece of a much larger scientific puzzle.