A Fierce Visitor Stops for Lunch

Ocean crust cored since 1974
Inquiring Minds Want to Know: A Student Asks How We Drill 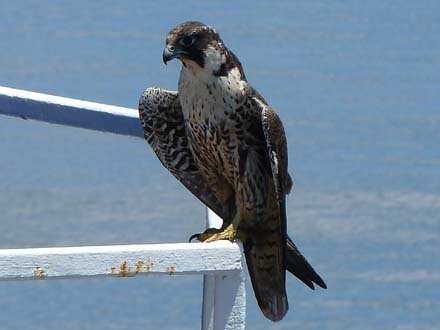 A few days ago, this fierce looking fellow stopped for a brief respite on the JR before continuing on his (or her?) way north for the summer. Sandy Dillard, a marine lab specialist on this expedition and an avid birder, recognized right away that we had a Peregrine falcon in our midst.

Sandy says it’s a good bet that the falcon will follow the Pacific Flyway, one of the major bird migration routes in North America, up the western seaboard of the United States and maybe all the way to British Columbia in Canada.
In order to help keep us all on our toes when it comes to birdwatching on this expedition, Sandy’s brought along a book of "pelagic birds" (birds that frequent coastal waters and the open ocean), to help us identify the birds we see out here. And, he’s started a list of birds he’s seen, and put it up on our computer network to help us all become more knowledgeable about those feathered friends who come to visit.
Here are the birds Sandy’s identified so far:
Red-footed Booby
Brown Booby
Peregrine Falcon
Swallow-tailed Gull
Wilson’s Storm Petrel
Northern Phalarope
Baltimore Oriole
If you think this falcon looks pretty satisfied with himself,…

…maybe it’s because he’s just caught and eaten a tasty snack. Folks who were up on deck at the time saw him catch and eat one of the smaller birds that had been hanging around the ship that day. And although I missed the show, a few hours later I came across a few little gray feathers that had landed below.
Well, the falcon needed sustenance to keep him going on his journey, and the little bird gave him that.
[Photo by Ron Grout]
EXP335
28
Apr 2011
By Sarah SaundersUncategorizedLeave a comment