Ratatouille, and Burgers, and Flan, Oh My!
A Fierce Visitor Stops for Lunch 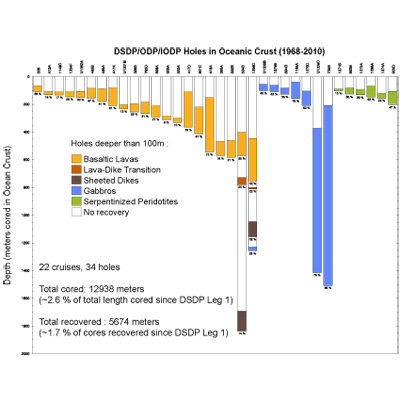 This graph shows the total number of boreholes that were drilled and cored deeper than 100 meters in oceanic crust (oceanic plateaus and passive margins are not counted here) since the beginning of scientific ocean driling in 1968. These 34 holes represent less than 2% of the 332 kilometers of cores recovered since DSDP Leg 1. Not much is it? We still have a lot to discover in the ocean crust.

The first of these deep holes was drilled in 1974 in the Atlantic Ocean during DSDP Leg 37. Only four holes are deeper than 1 kilometer. The deepest one, Hole 504B, is in the Eastern Pacific, like Hole 1256D that we are trying to deepen now. The two other very deep holes were drilled in slow-spreading crust, in the Atlantic and Indian Oceans.