A Ship with a View

Ballast water
Journey into the past 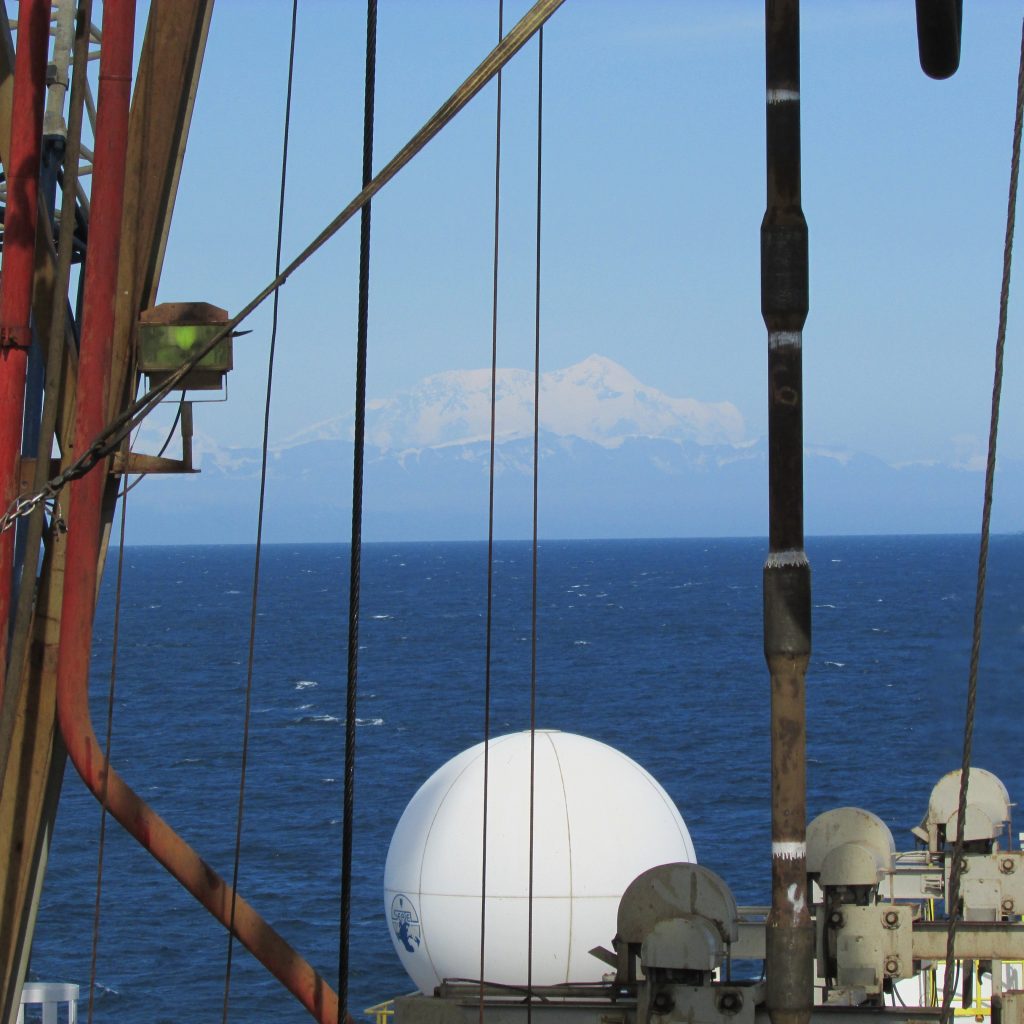 Did you see the spectacular image of Alaska that was taken on June 17th by NASA’s MODIS satellite? Click here to see the cloud-free image of Alaska that captures wildfires, snow, water, ice, and large plumes of sediment entering the Gulf of Alaska. Alaska’s grand landscape is breathtaking from space, land, and sea. We are currently drilling into the continental shelf, approximately 22 miles from the mainland and can see this beauty firsthand. From the ship we can see the breathtaking snow-capped peaks of the Chugach and Wrangell-St. Elias Mountains, and when the cloud curtain isn’t masking our view we have a spectacular view of Mt. St. Elias (18,008 ft) to the northeast and the Bering Glacier to the northwest.

The snowcapped peaks we are admiring are filled with some of the largest glaciers on Earth. Southern Alaska is home to the largest coastal mountain range in the world, and the grand size of the mountains contributes to the amount of precipitation (and glaciers) in southern Alaska. As moisture-laden air from the Gulf of Alaska travels northward it is quickly forced upward when it encounters the towering mountains along Alaska’s Gulf Coast. As the air rises it cools, becomes denser, and loses its capacity to hold moisture. The result is a lot of precipitation on the southern side of the S. Alaskan mountains. In winter months new layers of snow blanket old layers of snow, and after repeated cycles the snow compacts and recrystallizes, resulting in the formation of glaciers.

As if the view of Mt. St. Elias weren’t enough to blow our minds (as seen through the derrick above), we also have a spectacular view of the Bering Glacier, the largest surging temperate glacier in the world. To give you some perspective, the Bering Glacier contains approximately 15-20% of the glacial ice in Alaska!

What exactly is a surging temperate glacier?

Most glaciers do not surge, meaning their velocity and annual flow rates remain relatively constant. Glaciers flow as a result of gravity acting on them, and typical average flow rates are less than 1 meter per day. Surging glaciers are subject to large variations in flow rate and velocity. Some surging glaciers move 10’s to 100’s of meters per day. As you can imagine, huge volumes of ice are moved when a glacier is surging, causing local hydrologic and ecosystem changes. The Bering Glacier surges every 20 to 25 years and has surged at least six times in the last 150 years, the last surge occurred in 1993-1994.

The Bering Glacier is a temperate glacier, meaning ice and liquid water coexist within the glacier system for all or part of the year. As the name implies “temperate” refers to the thermal properties of the glacier, and in order for water to exist in both the liquid and solid form the temperature of the ice has to be just a fraction below the melting point of water. This means that a small amount of climate change can have a huge effect on the glacier system. If the temperature rises by a few degrees the glacier is subject to melting.

During the Last Glacial Maximum (LGM) ice extended to the edge of the continental shelf in Alaska and would have been hundreds of meters thick where we are today in the Gulf of Alaska. In recent times, the Bering Glacier has been retreating and thinning for more than a century. As temperatures rise due to anthropogenic causes, the retreat and thinning of Alaskan glaciers is expected to continue, if not accelerate. These changes will have an impact on many parts of the Earth system (ocean productivity and circulation, tectonics, ecology, etc.) and studies like those of Exp. 341 will not only reveal what conditions were like in the Earth’s past in S. Alaska, but also help scientists understand what conditions might be like in the future.