Seismic Profiles and S. AK Science with Dr. Lindsay Worthington
A Ship with a View 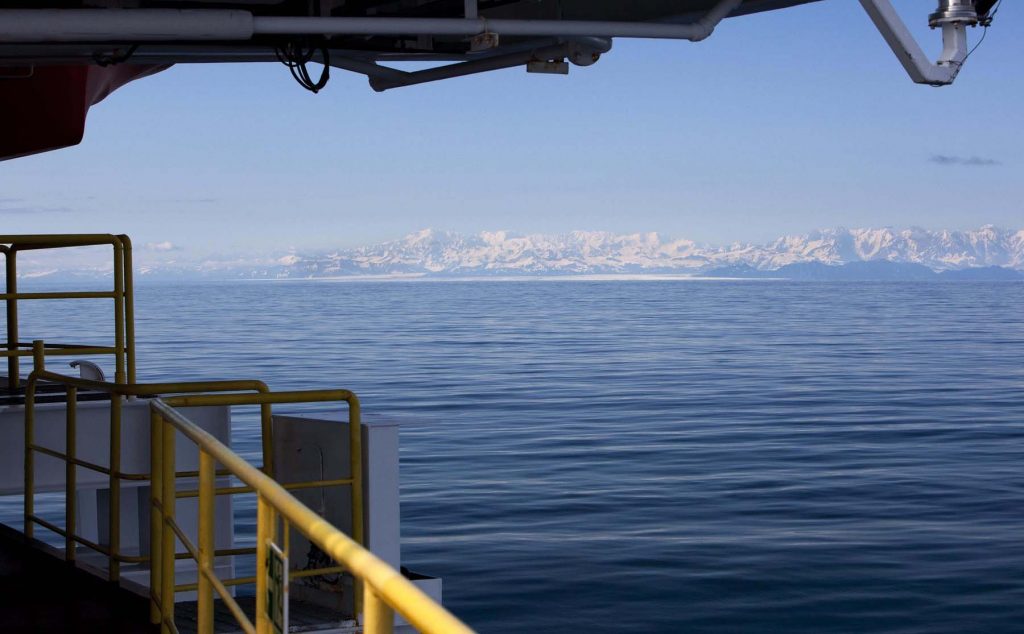 We are about 22 miles from shore and can see the beautiful St Elias mountain range from the ship.  Before we entered the US territorial zone the crew have been busy at work preparing the ship to meet coastal water regulations.

They have been scraping and water blasting the hull of any marine growth to prevent spread of invasive species. Water blasting a ship at the plimsoll line isn’t easy in dry docks let alone at sea when there are swells, cold conditions and maneuvering a floating skiff, but the work was done efficiently around the whole hull.

Preventing invasive species from being transported to another country is a difficult task at sea.  Ships can clean tiny, tenacious invertebrates and seaweeds off hulls by scraping or water blasting but what about the microscopic spat and spores you can’t see?   In the past, these were found in ship’s ballast water, but things are changing.

On a ship, ballast is used to add weight for maintaining stability at sea.  Seawater is often used due to it’s accessibility.  Once cargo has been off-loaded from a ship, the ship takes on ballast in order to replace the weight. When another cargo is loaded, the water is pumped back into the ocean. Between three and five billion tons of ballast water is transported internationally each year. ?

Due to biosecurity hazards many ships now use freshwater.   In the past microscopic planktonic life released from ballast water populated ports all over the world causing problems of competition and habitat loss for native species.

In Napier where I live, there is a port that unfortunately has a seaweed, Undaria pinnatifida  that was introduced from Japan in ballast water sometime before 1987.   This happened before we realized that ballast water was the problem.

Thankfully we have biosecurity laws in place that prevent this from happening in the future.   For example, to minimize the spread of invasive species in U.S. waterways, the Environmental Protection Agency and the U.S. Coast Guard are developing plans to regulate the concentration of living organisms discharged in the ballast water of ships.  Not an easy task!

To counteract this problem the JR uses freshwater for ballast, either by purchasing it in port or by making it in the ship’s desalinator to top up the ballast.  This can be a costly process  but worthwhile in the end for curtailing the spread of invasive species.

Speaking of ballast, I wonder if that’s why we all got our sea legs so quickly- the extra weight or ballast we have gained from all the excellent ship food we have been eating!