Women in Science
A Total Amateur's Guide to Core Description 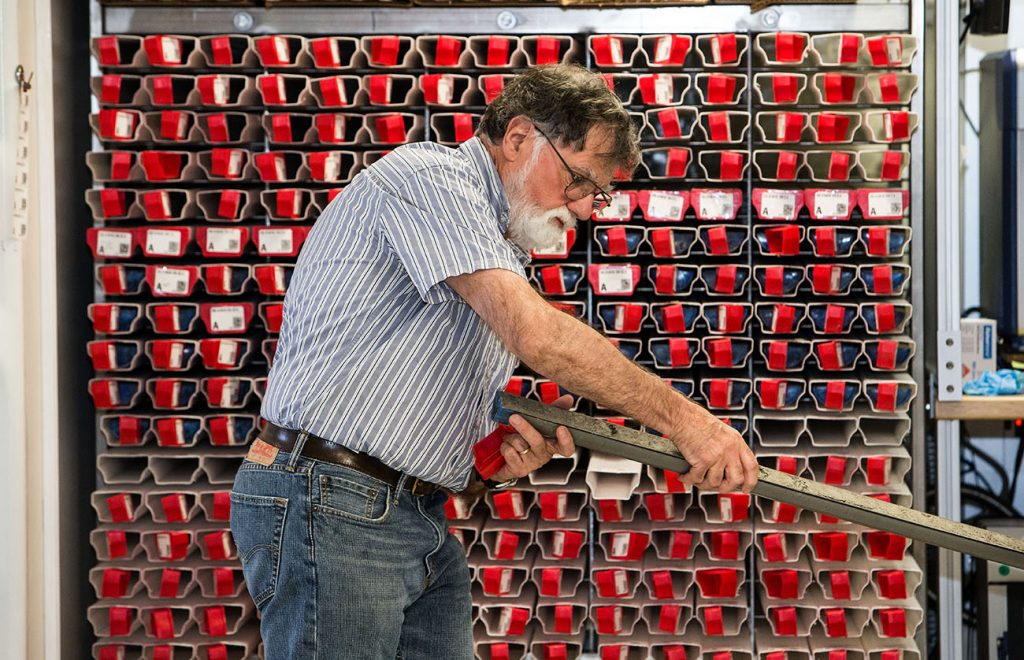 As an education officer, I’m usually the least qualified scientist in the lab. I can’t identify foram species on sight like the palaeontologists, I can’t read a Zijderveld graph like the palaeomagnetists, and I wouldn’t even know where to START operating an Ion Chromatograph. But there is one area that I feel like I can actually help out a little, and that’s at the core description tables.

These tables are where half-cores are examined by the trained eyes of the core description team, as they look for fossils, patterns, and features that can tell them about the sediment. On this expedition, we’ve pulled up over 3 kilometres of core so far, and every single centimetre has to be examined by the core description team. And a few extra eyes, even as untrained as mine, can sometimes be helpful in spotting an interesting feature and pointing it out to the experts.

So here’s a Total Amateur’s Guide to Core Description. If you’ve got a pair of eyes and some sediment at home, you can try looking for these features yourself!

“Hey Chelsea, I found some shells”

What they actually are: Macrofossils.

Macrofossils are any preserved organic remains large enough to be seen without a microscope. Some macrofossils we find in the cores are the shells of gastropods (molluscs with one shell, like snails), bivalves (molluscs with two hinged shells, like clams), coral, echinoderms (seastars, urchins) or even sometimes a bit of crustacean. These can tell us the sorts of enironment the sediment was deposited in, and also the size of the fossils can help us study the movement of sediment in the area (large fossils are harder to move).

“Hey Don, there are little white specks stuck in the core”

What they actually are: Foraminifera tests.

Forams are small single-celled creatures which leave behind little calcium carbonate fossils (called “tests”) when they die. These are what the palaeontologists spend most of their time looking at, because we can tell a lot about the age and environment of a core by the species of foram in it. Some of the forams are microscopic, some are a millimetre or two, but some species can get up to 20cm across (look up Xenophyophores)!

“Hey Tobias, did somebody draw on this core?”

What it actually is: Bioturbation.

Bioturbation is the pattern left behind by burrowing creatures. They dig a tunnel out of the sediment, and that tunnel is later filled in by a different sort of sediment. This helps us figure out the relative ages of different sediments (the stuff filling the hole must be newer) and the sorts of creatures that lived around that time.

What they actually are: Pyrite nodules

Pyrite is an iron sulfide mineral, which can build up in spaces in the sediment. You might know it as fool’s gold, and if it has enough space and time it can form attractive cuboid crystals (though ours is just small metallic chunks) or even replace the less durable organic materials of fossils (we haven’t seen any of those yet). Previous JR expeditions have also found manganese nodules on the seabed, which can form solid metallic chunks the size of cannonballs!

What that stuff actually is: Peloids or oiids

Peloids and oiids are small rounded particles, usually of calcium carbonate. With the naked eye, they’re hard to tell apart, but under a microscope, they have different structures. Ooids are formed by layers of calcium carbonate accreting around a central nucleus, usually a tiny piece of shell or sediment, and they have clear internal layers. Peloids are the… leavings of small animals that have a calcium carbonate rich diet. They’re shell poop. So they don’t have the neat internal rings of an oiid, though they do sometimes develop a coating of calcium carbonate outside the original dropping. The big different between ooids/peloids and sand: Sand is worn down from bigger rocks, ooids/peloids are built up from smaller ones.

“Are those ancient gold coins?”

No. They’re not. That doesn’t happen.