About foraminifera and Pokémon 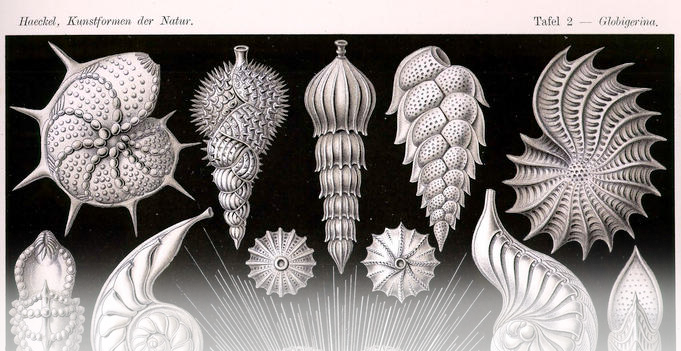 *Beautiful illustration of forams made by Ernst Haeckel in 1900

You must know what Pokémons are. Your son, nephew, younger brother or even you’ve had some contact with these colourful and varied characters created by Nintendo in 1996. At least Pikachu I’m sure you’ve heard of. That yellow rabbit looking creature with red cheeks, which jumps, screams and release rays. Many people collect, trade, and dispute the cards containing the powers, strength levels, and other qualities of more than seven hundred characters.

Have you heard of Foraminifera? Well, they are unicellular beings surrounded by shells. Tens of thousands of species can be found today living in the ocean all around the world and they also have existed for many millions of years, and whose requirements for survival are valuable sources of information about water depth, climate, oxygen levels, geological ages and types of nutrients in the water in the periods in which they lived. For these reasons Expedition 369 has many micropaleontologists focused on searching for and studying these creatures and also calcareous nanofossils in the samples taken from the ocean floor. One of the co-chiefs of the expedition is Brian Huber, who is a micropaleontologist who specializes in the study of foraminifera. With his team formed by David Watkins (US), Maria Petrizzo (Italy) Erik Wofgring (Austria), Rodrigo Guerra (Brazil), Kristy Edgar (UK) and Trine Edvardsen (Denmark), he carefully analyzes the samples to identify and interpret each finding.

Forams, as they are called, can live on the ocean bottom (benthic) or floats in the water (planktic), their shells may have different compositions, they can have “pseudo feet” to move or feed and many other peculiarities. The history of the discovery of the first species is equally curious. Samples of foraminifera later called Nummulites, found in the blocks which form the pyramids of Egypt, were presented to the Greek traveller and writer Strabo, the geographer (63 BC-21C), as fossils of lentils used to feed the slaves who built the pyramids.
What differs the interest of the people to the characters of the games by these small unicellular beings? Pokemon creator Satoshi Tajiri told a Time interview in 1999 that the idea for game creation came from his attraction to insects. As a child, Tajiri was even nicknamed Mr Bug for keeping a collection of bugs. This curiosity could have led the designer to study Biological or Earth Sciences, as I have heard from many scientists talking about their motivations to choose their careers, but instead, it took him to the creative route, which gave him the freedom to mix imagination with what he learned about ants, crickets, and dragonflies. His knowledge was applied to the moments of leisure and distraction of people.

What I mean here is that perhaps even though the foraminifera being as varied and  fascinating as the Pokémon (in my point of view much more), and with their properties revealing a lot of information about the planet’s past, perhaps the form and the occasions on which they are addressed and presented is not  attractive to the general public. We don’t see images of the complex shells of millions of years out of educational environments. There is also a scientific formality in dealing with themes in a very responsible way and carefully avoiding misunderstandings. An imminent tension involves scientific issues, doesn’t it? But the recognition that scientific subjects are the inspiration for many of the cool things we see for entertainment is important.

Science would not be Science without its rigour, but most things that we have on our planet and that lead to scientific research are extremely interesting and could garner more attention if they were also addressed in more attractive and accessible ways.

Author:
Cristiane Delfina
About:
Oi! I am a documentary filmmaker and the very first Brazilian outreach officer at the IODP program. I directed shorts in many countries and am always up to produce content about touching subjects and helping institutions to present results that can't be shown in numbers or reports. Sharing what I see is what I like to do the most.
More articles by: Cristiane Delfina